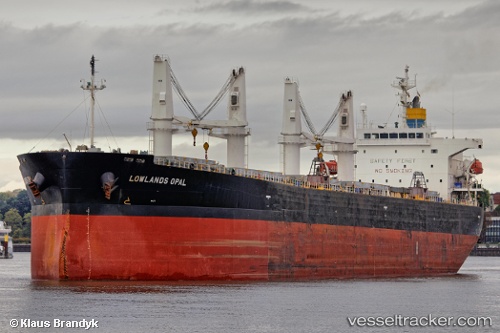 660 miles from the finishing line in Antigua, the 24-year-old Lauren Morton and her Talisker Whisky Atlantic Row Challenge partner Hannah Lawton were delivered at Beacncour on Mar 23, 2014. They had been rescued by the "Lowlands Opal" after suffering several misfortunes, and taken to Becancour. The duo was plucked from the ocean by the crew of the cargo ship after being adrift for 44 days. In her last online blogg on Mar 15, the former Lady Hastings primary pupil said they had suffered a lot of bad luck after setting out from La Gomera in December 2013. First of all the autohelm was trying to turn them back around as soon as the race started. It snapped off a few days later, the compass always pointed to 90 degrees east so was neither use nor ornament. The blocks that held the dagger board in, came off so they could no longer use it, they got stuck in various low pressure systems, one of the batteries set on fire burning a hole through the charts, they capsized, the rudder came off, the rod was dropped to the depths of the Atlantic, the support yacht came and the rudder they brought didn’t fit and then the support yacht left. Lauren, a paediactric nurse from Briston UWE and Hannah, of Stoke-on-Trent, were the youngest to compete and were determined to raise money for cancer care but were picked up on day 96. The pair, who were praised by the captain of the "Lowlands Opal", were expected to spend a few days in Montreal before flying back to England.

Suspicious death on board

A crew member of the "Lowlands Opal" was found dead on board the ship in the morning of Mar 3, 2013, shortly after its arrival at the Beauport Terminal in the port of Quebec at 7.30 a.m. where it was to unload some of its cargo from Brazil. Investigators from the Office of the Transportation Safety Board of Canada (TSB) were dispatched to clarify the circumstances of the death. Two TSB investigators assessed and collected information about the incident. According to initial reports, the suspicious death occurred at sea. Both the TSB and the Sûreté du Québec said not to be responsible for the disclosure of the identity of the dead.