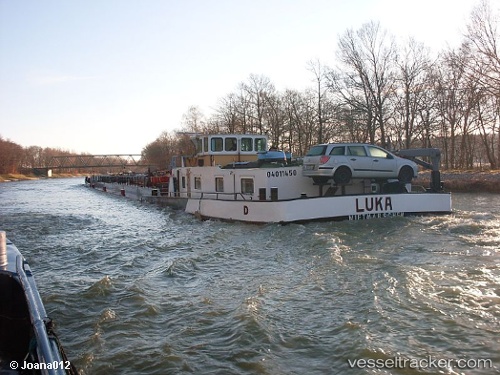 The "Luka" was docked in the St. Goar port having been taken alongside the "Sankt Nikolaus" and two steering tugs on Nov 21 around midday. Here the damage is to be investigated. Video: http://www.youtube.com/watch?v=oSrrb-NVoB0#t=234 German report with photos: http://www.rhein-zeitung.de/region_artikel,-Ladung-abgepumpt-Havarierter-Tanker-wieder-frei-%5BUpdate%5D-_arid,1070189.html

Earlier than expected, 2,5 hours after the lighter tanker "Sankt Nikolaus" had gone alongside the "Luka", 1232 ts (EU-No.: 04011450), at Oberwesel and some hundred tons of fertilizer have been lightered, the grounded tanker could be refloated. Both ships proceeded jointly, stern ahead, with the Rhine current towards the Loreley port St. Goar where further proceedings were to be decided. As still water was seeping into the tank barge, the pumps were kept running. The Rhine traffic was to be resumed after the river authority has surveyed the bottom for possible shallows caused by the grounding. German report with photos: http://mobil.rhein-zeitung.de/startseite_artikel,-Havarierter-Tanker-wieder-frei-Rhein-noch-gesperrt-%5BUpdate%5D-_arid,1070189.html

On Nov 21 at 8 a.m. the lighter tanker "Sankt Nikolaus" went alongside the "Luke" after having discharged its cargo on the upper Rhine the previous evening and then started its voyage downstream to Oberwesel. The ship was taking the cargo of fertilizer of the grounded tanker the leak of which had been patched before. The work and following salvage attempts were expected to take about five hours. During this time the ship traffic on the Rhine was blocked between Bingen and St. Goar. The "Luka" was underway from Flörsheim to Magdeburg when it got out of the fairway due to a navigational mistake and ran onto a rocky shallow close to the shore. German reports with photos: http://mobil.rhein-zeitung.de/startseite_artikel,-Leichterschiff-pumpt-havarierten-Tanker-leer-Rhein-gesperrt-_arid,1070189.html http://www.swr.de/landesschau-aktuell/rp/tanker-auf-grund-gelaufen-festgefahren/-/id=1682/nid=1682/did=12413802/1ee6rox/