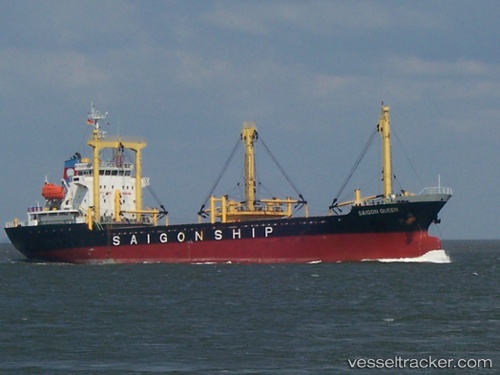 one of the crew member's dead body found in Maldives washed ashore in an uninhabited island 3rd Feb 2013. You can find the details from one of the local newspaper (you can see the picture), http://www.sun.mv/26766

Eight out of the 18 crewmembers of the Saigon Queen who were rescued after the ship sank off Sri Lanka on October 30 with 22 on board returned to Vietnam via Ho Chi Minh City’s Tan Son Nhat airport yesterday, Nov. 6, 2012. The eight sailors returned on two flights, one of which arrived at the airport at 11 am, the other at 6:35 pm, said Le Minh, deputy director of Saigon Shipping Joint Stock Company, the ship’s owner. These sailors had flown home from Bangladesh, and the remaining crewmembers are expected to return home today, November 7, he said, adding that the search for the four missing sailors, including the ship’s captain, remains ongoing.

The "Saigon Queen" capsized and sank in Sri Lankan waters on Oct 30, 2012. 18 crewmembers have been rescued while the four others, including the captain, remained missing. At 12:12 p.m. the MRCC Vietnam had received emergency signals indicating a potentially hazardous situation from the "Saigon Queen" while it was transporting wood products from Ho Chi Minh City to Tutoourin where it was expected on Nov 1. The ship had rolled from side to side, causing the cargo to shift. Efforts of the crew to re-fasten the goods failed, and soon thereafter the MRCC lost contact with the ship. At 9:20 p.m., the Cyprus-flagged cargo vessel "Pacific Skipper" saved three crewmembers and maintained contact with 15 others who were adrift on their life rafts after the ship sank. All these people were rescued later. Meanwhile, four other crewmen, including the captain Nguyen Minh Luan, 51, the chief mechanic Hoang Van Ban, 58, Tran Van De, 54, a mechanic, and Pham Phu Huu, 27, a deckhand, were reported missing. Search efforts were commenced at once. The MRCC Sri Lanka coordinated the SAR opeartion jointly with the Vietnam Shipping Communications und Electronics Company (Vishipel), the US Coast Guard and the MRCC Chennai.