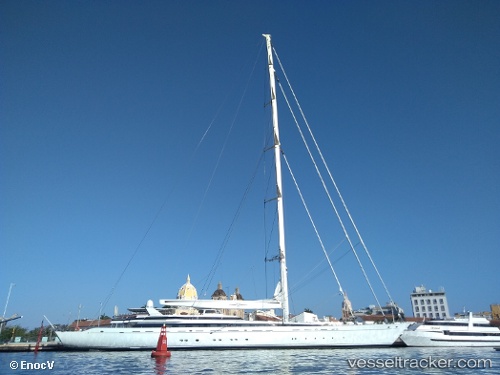 A strong gust of wind nearly set the "M5" adrift in Portland Harbor on Sep 22, 2018. The sudden and powerful gust at 8:15 a.m. caught the yacht broadside. The vessel had been docked at DiMillo’s Marina since Sep 3. Combined with the incoming tide the force was so great that the vessel ripped a floating dock away from several pilings. The float remained attached on one end, albeit perpendicular to its intended location, preventing the super yacht and several other vessels from being set adrift. The only damage during the incident was to the pilings, some of which were bent and broken. In the morning of Sep 24, a small crane was on site making repairs, and the "M5" was docked at the end of Chandler’s Wharf. Advertisement. Gas and electrical lines to the dock remained intact during the incident, so no fuel spilled into the harbour. The gas lines have been shut down during the repairs. Report with photo: https://www.centralmaine.com/2018/09/24/mega-sailing-yacht-catches-wind-gust-damages-pilings-in-portland-harbor/

She is the largest single masted ship ever launched, built to specifications which make her a true legend of the ocean waves. The M5, formerly known as the Mirabella V, carries the biggest sail in the world and features a mast nearly twice the height of Nelson’s Column. Her astonishing vital statistics don’t end there; the M5 is wider than a Royal Navy Type 42 destroyer and, should her owner wish, a double decker bus can easily be fitted inside without poking out on deck. The ship, which was launched in 2003 at the cost of £50million has just set sail from Falmouth’s Pendennis Shipyard after a two year refit expected to have cost her owners millions. Read more: http://www.westernmorningnews.co.uk/Record-breaking-superyacht-sets-sail-Falmouth/story-21028767-detail/story.html#ixzz30HkfH8n9

A technical problem onboard visiting luxury yacht Mirabella V caused soot to be released into Hamilton Harbour this week. The vessel was moored off the Royal Bermuda Yacht Club at the time. A Government spokesman described the soot as “non-toxic”, and said there was no cause for alarm. Mirabella V is the largest single-masted yacht ever built. She was launched in 2003 at an estimated cost of more than $50 million. The vessel is part of a fleet of super-yachts once owned by former CEO and chairman of the AVIS car rental company, Joe Vittoria.