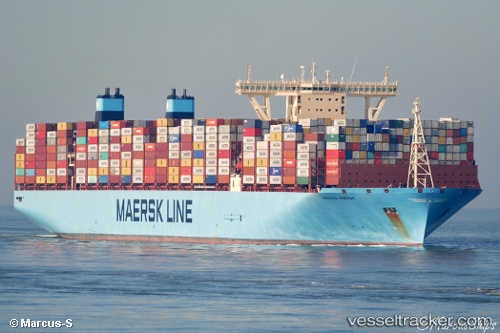 Antwerp sets new record with arrival of the Madrid Maersk

A new record was set in the Deurganck dock in the port of Antwerp Friday morning, June 9, when the Madrid Maersk moored there for the first time. With a length of 399 metres and a capacity of 20,568 TEU it is the largest container ship ever to call at the port, the company said in its press release. The Madrid Maersk will remain in Antwerp until Sunday, June 11, 2017. During its stay 300 dockers will work non-stop to load and unload 7,000 containers. After the call in Antwerp the ship, which forms part of the Maersk Line’s AE2 service, will set sail for Rotterdam.

UK – The growth in the new generation of container ocean freight carriers that are just entering service means that of late there have been a host of record size vessels calling into British ports. Now the largest container ship to call in North Europe so far has made its maiden call at the Port of Felixstowe. The 20,568 TEU Madrid Maersk, operated on the NEU2 Asia to Europe service from the 2M shipping alliance between Maersk and MSC, has arrived at the port, with over 6,000 TEU for the UK loaded in China and Malaysia. Commenting on the latest record-breaker to call at the UK’s largest container port, Clemence Cheng, Chief Executive Officer of the Port of Felixstowe and Managing Director of Hutchison Ports Europe, said: “The Port of Felixstowe is firmly established as the port of first-choice in the UK for the largest mega ships. We were the first in the UK to handle this latest class of vessel and continue to offer the widest and most frequent range of services on the major Asia - Europe trade.” Built by South Korea’s Daewoo Shipbuilding & Marine Engineering, the Madrid Maersk is 399 metres long, has a beam of 58.6 metres and is the first of Maersk Line’s second generation Triple-Es, known officially as the EEE Mark II. The original Triple-Es have been regular callers at Felixstowe since 2013. Delivery of the remaining 10 Triple-E Mark II’s is expected to take place between now and the middle of 2018. http://www.handyshippingguide.com/shipping-news/largest-freight-container-vessel-yet-calls-at-uk-port_8085