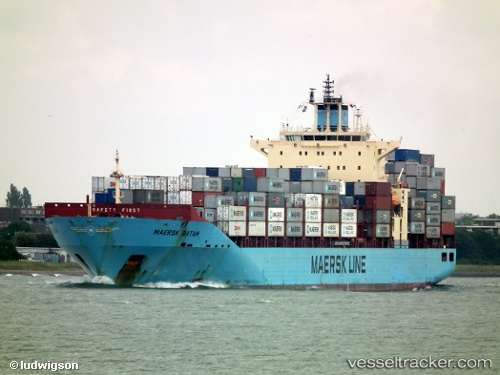 The US Coast Guard medically evacuated the british captain of the 'Maersk Batam' in the night of March 23, 2020, approximately 100 miles south of Puerto Rico. He had experienced life threatening symptoms of a possible stroke during the ship’s transit from St. Marta, Colombia to their next scheduled port call in Southhampton, England. Coast Guard Sector San Juan watchstanders received the medevac request at 9:55 a.m. whoöe the ship was transiting 175 nautical miles southwest of Mona Island, Puerto Rico. Coast Guard watchstanders launched a MH-65D Dolphin helicopter crew from Coast Guard Air Station Borinquen to conduct the medevac, and diverted the Coast Guard Cutter 'Thetis' (WMEC-910) to shorten the distance with the 'Maersk Batam' and serve as an emergency platform for the rescue helicopter if required. Watchstanders coordinated with Customs and Border Protection and U.S. Virgin Islands authorities throughout the medevac. They also inquired and received from the 'Maersk Batam' that the patient’s condition was unrelated and that he was not experiencing symptoms of COVID-19. Once on scene, the helicopter deployed the aircraft rescue swimmer to the 'Maersk Batam' to assess the patient’s condition. The aircrew used a rescue litter to hoist the ship’s captain aboard the aircraft. Following the hoist, the patient was transported the Cyril E. King airport in St. Thomas, U.S. Virgin Islands, where he was received by awaiting emergency medical services personnel and taken to the island’s Royal Lester Schneider Regional Hospital.

The "Maersk Batam" was detained on May 11 after cocaine was found hidden in a container loaded with bananas. On May 14 she moved from Izmit port to Istanbul’s Ambarli container terminal. On May 17 the vessel left Ambarli and dropped anchor off Marmara at 7 p.m. Among the 25 crew members were Filipino, Indian, Thai, Russian and Ukrainian nationalities. Some of the crew, including the Ukrainian Master and the Russian Chief Engineer, were arrested. After several days spent under arrest, the Chief Engineer was released, no news regarding the others.

293 kilos of cocaine found in container

293 kilos of cocaine were found hidden in a container with bananas on board of the "Maersk Batam" upon its arrival to Izmit on May 11, 2017. The vessel was taken under control while transiting Dardanelles. Turkish anti drug agencies had been tipped off earlier, and were waiting for container ship arrival to Turkish waters. 122 containers were scanned by X-ray, suspicious were checked with dogs. The ship was bound for Izmit, coming from Malta. The expected departure now was on May 14 instead of May 11 or May 12. The Master and Chief Engineer were detained for interrogations. The ship had come to European waters from Central America, with calls at Colombia and Panama ports.