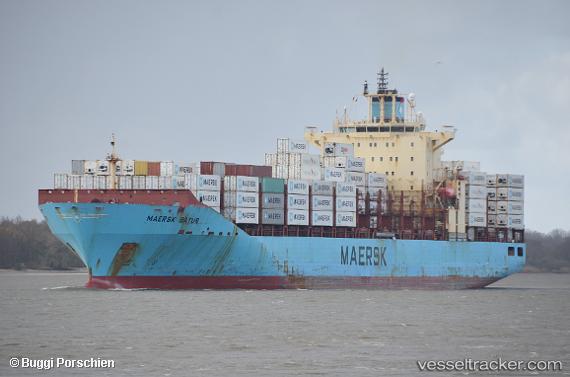 Engine breakdown in Strait of Gibraltar

The 'Maersk Batur' was hit by engine trouble on Jan 29, 2020, shortly after it left the port of Algeciras on its way to Newark, USA. When transiting the Strait of Gibraltar the engines broke down. The captain asked for tug assistance, and the container ship was assisted back towards Algeciras by the Dutch tug 'ALP Guard' (IMO: 9398539) and the 'SAR Mastelero' (IMO: 9525730 ) of Salvamento Marítimo. On Jan 30 around 1 p.m. the vessel was towed into port by the tugs 'VB Algeciras', 'VB Andalucia', 'VB Simun' and 'VB Siroco'. At 1.20 p.m. she was berthed at the Dique de Abrigo Ingeniero.

Attacked by pirates, three South American fishermen were left drifting for two weeks in the Pacific Ocean. They were rescued by the "Maersk Batur" in a challenging operation. On June 1, 2015, the three fishermen set out from their hometown of Cabo de San Lorenzo. The trio had done the trip a few times before and their skiff was carrying enough fuel, water and food for the return journey to Malpelo. Two days into their journey, disaster struck. Late in the evening on June 3 the group was attacked by a gang of heavily armed pirates who callously robbed them of both outboard motors and all fuel supplies. Left with no means to navigate or communicate, it was a hopeless situation as the skiff drifted farther and farther into the vast expanse of the Pacific Ocean. In the days that followed, they tried to ration their limited provisions, kept fishing and eating their catch, but with no rain to replenish their lifesaving water supplies, they knew that time was running out. 12 days had passed since the pirate attack, and the skiff had drifted nearly 570 nautical miles in open sea. On June 15, the "Maersk Batur" was just north of the Galapagos Islands, having departed Balboa, Panama two days earlier for its southbound voyage to Auckland. At 11.10 a.m. Captain R. Morrison received a call from the bridge; the officer on watch had spotted a small boat apparently in difficulty with the crew waving with arms and flags. Fortunately, the officer on the bridge took the time to study the situation closely, and realising that all did not appear well, he initiated an immediate rescue operation. All officers and crew reacted swiftly and efficiently to carry out the delicate and precise manoeuvring required to position the vessel safely alongside the small boat. The exhausted men below helped secure their skiff with the ropes and lines thrown to them, and after less than an hour they were able to climb up the ladder to safety. Safely on board the "Maersk Batur", the exhausted men were grateful to receive a good meal and plenty of rest. They were able to contact their families and give them the good news that they would be returning home safe and sound. When the vessel arrived in Auckland on June 30, local Maersk Line staff was able to meet the three men before their flight back to Ecuador. Report with photos: http://maersklinesocial.com/maersk-batur-saves-fishermen-lost-at-sea/#sthash.jBwe6Fbd.dpuf

Report:Container ship towed after near miss

A container ship which lost power while navigating Otago Harbour was pulled into deeper water by a tug - having had a near miss with the shipping channel's sandbank. In April, the 223m-long container ship Maersk Batur lost all power shortly after departing Port Chalmers, which prompted Port Otago's tugs Otago and Rangi to return to the ship and tow it back into deeper water. The incident was, by regulation, reported by Port Otago to Maritime New Zealand (MNZ), the Transport Accident Investigation Commission (TAIC) and Otago's harbour master. MNZ has, since February, suspended publishing its monthly incident summaries, as it considers privacy issues. The Otago Harbour near miss came to light after it was disclosed in parliamentary question time, when Transport Minister Gerry Brownlee released reports of 50 ship-related collisions, or near misses, to Green Party MP Gareth Hughes. Mr Hughes was criticising the Government for playing down recent shipping incidents in the wake of the 236m container ship Rena grounding, the subsequent oil clean-up and removal of the wreck from Astrolabe Reef, off Tauranga. Included in the reports was a five-minute grounding of a 177m Singaporean cargo ship off New Plymouth's coast in May, which the master had not reported until five days after the incident. Maersk Batur was reported as having had ''possible contact'' with sand at the edge of the channel in Otago Harbour. Maersk NZ operations manager Stuart Jennings said he understood there had been a ''fuel flow failure'' aboard Maersk Batur while it was in the channel and the engine ''cut out'', leading to the vessel's master dropping anchor and restarting the engine, all of which had taken only a ''short time'', he said. ''There were safety protocols of the port and ship in place which were enacted ... It was concluded there was no danger.'' The Singapore-registered 223m-long, 43,000 tonne-plus Maersk Batur is a regular visitor to Port Chalmers, and global shipping giant Maersk is the port's largest customer. Port Otago chief executive Geoff Plunket said Port Otago's 100% owner, the Otago Regional Council, had been informed after the mandatory reporting to MNZ, the TAIC and Otago's harbour master. None of the agencies had undertaken a formal investigation. Port Otago's own investigation was completed and found ''no issues'' for the port company, he said. He declined to release the findings, saying further comment had to come from Maersk. The tugs Otago and Rangi accompanied Maersk Batur when it departed Port Chalmers, and they left the vessel several hundred metres from the port, as planned, Mr Plunket said. However, they were called back and were ''immediately able to assist'' in towing Maersk Batur to deeper water. The MNZ incident report said the ship, which had a Port Otago pilot on board, suffered ''a temporary power failure'', causing its bow to turn towards the channel edge, but with a tug's assistance the ship was moved to ''safe water''. ''The master of the ship reported possible contact of [the] ship's bow with [the] soft sand edge of the channel,'' MNZ said. The cause was reported as a ''fuel flow meter'' issue, which caused the main engine and generator to become stuck. Mr Plunket said there had been ''no serious incidents'' with vessels, such as a navigational marker or the channel being struck, in Otago Harbour in the past two years MNZ said it carried out a ''port state control'' inspection of Maersk Batur in Tauranga and a diver inspected the vessel in Auckland. No damage was found. Source: Otago Daily Times