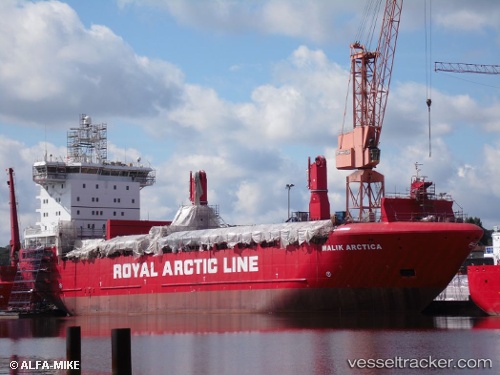 The 'Malik Arctica' got stuck in ice off its port of destination, Ittoqqortoormiit, in Southeast Greenland on Oct 7, 2020. The ship was loaded with winter supplies to Ittoqqortoormiit and had saile dfrom Aalborg on Sep 27. The vesssel now had to wait for ice conditions to improve. The ship was moving with a speed of 0,2 knots with the ice floe in eastern direction in the Kangertiqqivqay region in pos. 70° 11.28' W 022° 10.87'. But the weather changed so that the ship could get rid of the ice as early as Oct 8 evening.

The "Malik Arctica", which berthed in Paamiut on Feb 8 at 5 p.m. suffered had a technical fault of the main engine which meant that the ship could not continue as scheduled. The damage was expected to be rectified in the middle of next week, so the vessel would be ready to start on the following supply trip according to the sailing plan. The Danish multi purpose carrier "Ivalo Arctica", 1194 gt (IMO: 9618147), had to take over the rest of the current rotation for the "Malik Arctica" and sailed from Nuuk to Paamiut to load goods for Narsaq, Qaqortoq and Nanortalik. The Royal Arctic Line expected the "Ivalo Arctica" to arrive in Paamiut in the night of Feb 10. Due to the limited size and capacity of the "Ivalo Arctic", the calls of South Greenland will be divided into two or three sailing trips.

The "Malik Arctica" was being significantly delayed on the current journey due to the ice conditions at Qaanaaq. The call at Qeqertaq was cancelled, and the "Malik Arctica" now expecting to return to Aalborg on July 29, 2017. This means that the ship will also be delayed on the next trip. Royal Arctic Line expected to be able to sail from Aalborg on July 31, nine days after the sailing plan. The "Malik Arctica" is Royal Arctic Line's newest ship. It was handed over from the Remontowa yard in Poland in February and put into operation in May. It was officially named in Nuuk in June.