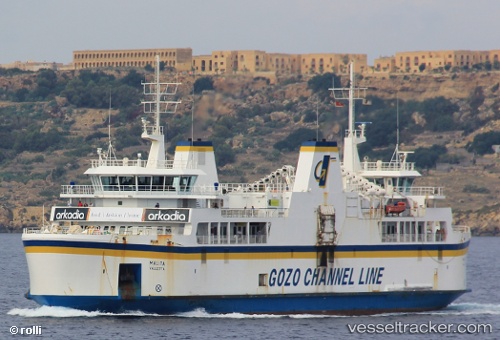 The Gozo ferry schedule has been affected after the 'Malita' hit the quay at Imġarr on its 3.00 p.m. trip between Ċirkewwa and Imġarr on Nov 25, 2019. The vessel hit the quay with its bow due to strong winds hitting the Maltese islands. No one was injured in the accident and passengers and vehicles disembarked from the ship normally. Surveyors started evaluating the damage, and divers were called to study any underwater damage. The Gozo Channel Company will be continually operating the two other ships to meet the demand, however the schedule will be somewhat affected. The ferry entered the Malta Dry Docks in Valletta on Nov 26 at 2 p.m. Worker were burning out the damaged part of the bow in Palumbo Dockyard No. 4 dock. Repairs were completed on Dec 2 at 1.15 p.m. The ship reached Cirkewwa at 2.15 p.m. and returned to its schedule to Mgarr with a first departure at 2.35 p.m. Photos: http://www.shipspotting.com/gallery/photo.php?lid=3086397 http://www.shipspotting.com/gallery/photo.php?lid=3086399# http://www.shipspotting.com/gallery/photo.php?lid=3086397

The 'Malita', while servicing the Gozo Channel ferry route, had to reverse after the forward loading ramp malfunctioned and became stuck in the morning of Sep 13, 2019, after the vessel arrived at Mgarr harbour, Malta. The process to emptying the vehicle deck thus took much longer than usual, causing delays to the ferry schedule.

The "Malita", after reaching Mgarr, Malta, had issues with its bow door on June 5, 2019, at 7.30 p.m. The master couldn't deploy the front ramp and hence he turned the vessel around to try the rear ramp. It gave in after around 20 minutes. Another ferry, the "Gaudos", took over the ferry service. The "Malita" resumed the service to Cirkewwa on June 6 at 5.20 a.m.