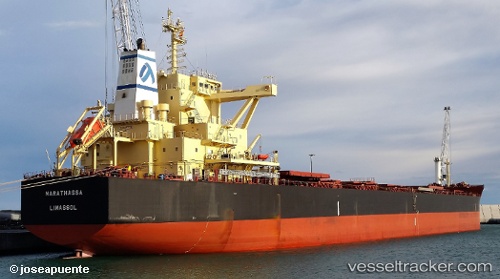 Marathassa acquitted of the last charges in connection with oil spill

The "Marathassa" has been acquitted of the last charges it faced relating to the April 8, 2015, spill that saw 2,700 litres of bunker fuel dumped into Vancouver's English Bay. On Feb 5, 2019, Judge Kathryn Denhoff acquitted the ship of charges under the Canada Shipping Act, ruling that while the ship discharged a pollutant, she accepted the ship's defence that it used due diligence in the case. She found that the discharge came from shipbuilder defects which neither the owner nor crew could have discovered beforehand on the brand new vessel. The judge also said that the ship had a comprehensive safety system in place, far exceeding the industry standard. The judge found that the spill was caused by a faulty valve and that an alarm designed to alert the crew was not properly installed. The ship, built in Japan, was only three weeks old. The judge said that the hazards in this case of defective alarms and a defective valve were not foreseeable. The "Marathassa", the crew and Transport Canada all expected that the brand new vessel would be free of those defects. She also ruled that the Crown had failed to prove the ship and its crew didn't implement an oil pollution emergency plan. She also noted that "given the extensive training, verification and ongoing monitoring of the crew, the "Marathassa" took all reasonable steps to ensure that the crew followed the requirements of the emergency plan. She also acquitted the ship on one charge under the Migratory Birds Convention Act. Originally 10 pollution-related charges were laid against the MV Marathassa and its owner, Alassia NewShips Management of Greece. The company did not face trial on any of them because the B.C. Court of Appeal ruled it had not been properly served with a summons. Other charges against the ship were stayed in August 2018. An acquittal of the ship on a charge under the Canadian Environmental Protection Act is currently under appeal.

The federal government’s public prosecution service has filed environmental charges in connection with a 2015 oil spill in English Bay that resulted in oil washing up on the beaches of West Vancouver. Ten charges under the Canada Shipping Act, federal Fisheries Act and Canadian Migratory Birds Act were filed in Vancouver provincial court last month against the MV Marathassa and Alassia Newships Management Inc., the Greece-based ship’s owners. Charges include unauthorized discharge of a pollutant, failure to implement an oil pollution emergency plan and failure to report pollution. Charges stem from an incident on April 8, 2015, when about 2,700 litres of bunker fuel oil flowed from the MV Marathassa, a grain ship, into the waters of English Bay and Burrard Inlet. In the wake of the spill, marble-sized blobs of tar began washing up on North Shore beaches. - See more at: http://www.nsnews.com/news/owner-of-marathassa-ship-charged-for-oil-spill-that-hit-west-vancouver-beaches-1.13672406#sthash.963z6Yjq.dpuf

Trial regarding oil spill due to commence

A trial stemming from the "Marathassa" spilling several thousand litres of bunker fuel near Vancouver's coastline begins next week. The "Marathassa" and its owner, Alassia NewShips Management Inc., face 10 charges from the April 8, 2015 spill in English Bay, which discharged about 2,700 litres of bunker fuel into English Bay and the surrounding beaches: Six counts under the Canada Shipping Act, including contravening regulations, failing to implement an oil pollution emergency plan, and discharge of a pollutant. Two counts under the Fisheries Act. One count under the Canadian Environment Portection Act. One count under the Migratory Bird Convention Act. Their first court appearance was scheduled for April 5, 2017, in the Vancouver Provincial Court. The response and recovery operation following the spill took 16 days. A Coast Guard-commissioned review into the spill found the Marathassa's owners slowed the reaction time to the emergency because they refused to admit the vessel was the source of the fuel spill. In total, there were 25 recommendations on how future marine spills could be handled.