MARINER OF THE SEAS 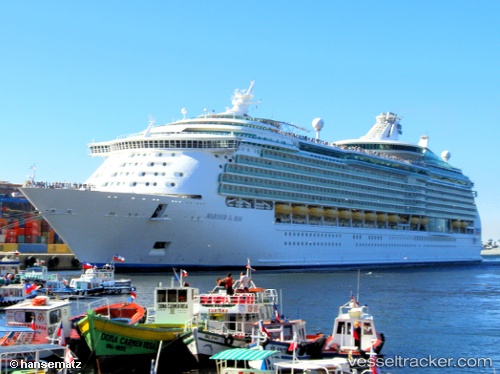 Two more cruises have been cancelled due to hurricane Dorian, as the storm slowly moved toward Florida. The sailing from Palm Beach to Freeport on Sep 5 by the "Grand Celebration" has been cancelled, making it three cancelled voyages for the company due to the hurricane. The "Mariner of the Seas" Sept. 2 sailing from Port Canaveral has been cancelled, after initially being delayed by two days. The ship was set to return to port from her Aug 30 sailing on Wednesday, and is now expected back to port on Sept. 5.

MARINER OF THE SEAS nears completion of USD 120 million upgrade

Royal Caribbean International’s 2003-built MARINER OF THE SEAS is nearing completion of her 33-day USD 120 million upgrade project at the Cadiz shipyard of Spain’s Navantia. The cruise vessel is due back in service on 11 June following the largest single refit yet undertaken on a RCI vessel.

Mariner of the Seas to undergo a US$90 million renovation

Royal Caribbean International’s Mariner of the Seas is to start sailing new short Bahamas cruises from Miami, Florida this June. This summer, Mariner of the Seas will offer three- and four-day weekend cruises from PortMiami to Nassau and CocoCay, Royal Caribbean’s private island destination. Prior to starting her new deployment, the vessel will undergo a US$90 million renovation to introduce multiple new dining venues, onboard entertainment features and more. New onboard highlights will include Sky Pad, where guests don a virtual reality headset to enjoy a space-themed bungee trampoline experience, or compete in intergalactic games. At night, guests will be able to head to the new Polynesian-themed bar The Bamboo Room for hand-crafted cocktails, or watch the biggest live sporting events in the Playmakers Sports Bar & Arcade, which will also serve alcoholic beverages and food.