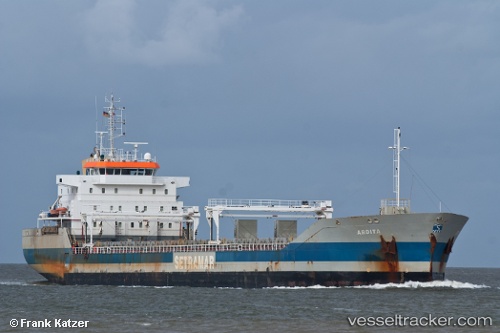 Crew of stranded Italian ship gets to go home for Christmas

The crew of the Ardita, an Italian cargo ship stranded in Hamilton Harbour since April, is going to make it home for Christmas. The news came Friday as a lengthy legal dispute with overseas bankers was resolved and the ship's ownership was transferred to McKeil Marine. The "glad tidings" couldn't have come at a better time for second engineer Vincenzo Esposito of Naples. It's his first time in Canada and the bitter cold has him longing for home. "Too much cold. I prefer sun in southern Italy," he says. Esposito is one of three Italian crew members. There are also eight Filipinos, two Lithuanians and a Latvian. Some have been here since April, others were flown in as replacements for those whose contracts ended while the ship was in port. http://www.thespec.com/news-story/7024700-crew-of-stranded-italian-ship-gets-to-go-home-for-christmas/

Ravenna-based Armamento Setramar decided to offer an outstretched hand to McKeil Marine of Canada in order to solve the dispute which led to the arrest of the general cargo ship Ardita in the port of Hamilton with 14 seafarers onboard. Recently local media in Canada reported that the vessel’s sale had been blocked by Italian banks but UniCredit has told Splash that they would be “ready and pleased to find a rapid solution in accordance with the company’s debt restructuring process currently underway”. Setramar’s ceo, Nicolò Poggiali, also wants to send a message of peace to McKeil Marine through Splash. On the dispute he said: “First of all I’d like to point out that the two parties were not in negotiation for a sale but for a bareboat charter with sale options subject to several market conditions. That’s the reason why the vessel was in Hamilton and made some works of refit in order to be reflagged and able to serve the local cabotage routes on the lakes.Read more at http://splash247.com/setramar-seeks-solution-stranded-ardita-canada/

Italian ship under arrest in Hamilton Harbour since April, crew in limbo

An Italian crew is in limbo while their cargo ship Ardita is under arrest in the port of Hamilton. The ship arrived in Hamilton on April 24 according to Larissa Fenn, a spokesperson for the Hamilton Port Authority, and has been detained since, over a legal dispute that does not involve the port authority. Bruce McKeil, chairman and CEO of McKeil Marine, said his company bought the Ardita but it is now under arrest by federal court order because the sale closing has been impeded by the Italian banks. McKeil said he purchased the Ardita from the Italian shipping company Setramar, based in Ravenna, Italy but that the banks in that country would not release the ship to him after he paid out some money and for it to sail here. "We were in the process of buying the ship for our fleet … We put up the capital to get it here with the full expectation of closing the deal here," McKeil said. The ship had to be brought here to be transferred to a Canadian registry, he explained. Now, McKeil is trying to recoup his losses. There are $2 million in bills owing, mostly to his company, but also to a shipping repair company here. Meanwhile, he has had to buy another ship for what he intended the Ardita to be used for — shipping cement down the St. Lawrence to a customer on the east coast. http://www.thespec.com/news-story/6813536-italian-ship-under-arrest-in-harbour-since-april-crew-in-limbo/