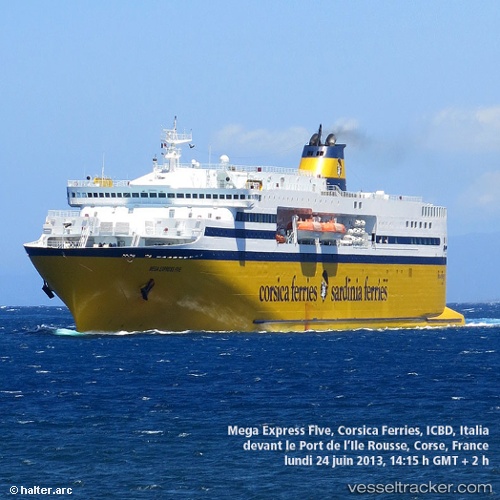 Discussion about procedures after grounding

Repairs of the damage suffered on May 31 on shoals at the Ile Rousse (Haute-Corse), were completed on June 9, and the "Mega Express 5" returned to its service to Toulon. The ship had suffered a scratch of 50 meters length and a crack in an empty ballast water tank of four centimeters length which had caused a water ingress. CGT officers of the Merchant Navy meanwhile pusblished an open letter to Frédéric Cuvillier, the State Secretary for Transport, blaming the owner for having endangered his passengers transporting them with such damages. The CGT wondered why the only legitimate decision to return to the dock and inspect the vessel had not been taken after the incident, but the ship continued to Toulon instead, and why the Cross-Med had he not been notified and why the ferry made four additional sailings to Corsica with nearly 5,000 passengers in total before repairs were started in La Spezia on June 2. The management of the company stated that only a vibration was felt on board, but it was not believed by the crew that it was necessary to immobilize the ship or notify authorities.

On June 1, 2014, the "Mega Express 5" ran onto a shoal while leaving the port of Ile Rousse bound for Toulon. The hull was dented 4 x 50 meters at the port side stern six meters below the waterline. Underway to Toulon, the crew remarked water ingress in a fuel tank and a cofferdam. In Toulon represenmtatives of the classification society RINA boarded the ferry. In the night of June 2 the "Mega Express 5" left Toulon at maximum speed for repairs in La Spezia within a few days. In La Spezia she was drydocked for repairs. The ship was replaced by the ferry "Sardinia Vera".

In the night of Dec 8, 2011, a man died aboard the "Mega Express". The ferry was in the port of Bastia when the accident occurred in stormy weather with winds of 1330 km/h around 1:30 a.m. The man from Roanne, Loire, came out to smoke a cigarette on deck 7 when he fell from the deck of the ship into the harbor basin. A CRS, who had gone to his assistance, suffered a crushed leg and a volunteer firefighter was injured by intervening. An investigation was initiated to determine the cause of death and an autopsy of the victim will be carried out. The ship was arrested for the length of investigations.