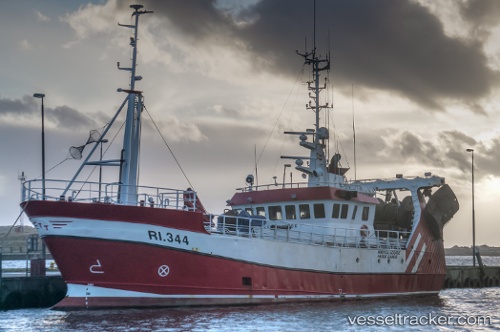 The "Mikkel Louise - RI 344" (IMO: 8108092), which had been caught by wind gusts of storm Siglinde and allided with a breakwater while entering the port of Hvide Sande in the night of Oct 23, was firmly resting on the bottom at the North Port Quay the day after the accident, surrounded by oil booms. However, the outcome might have been much different. After the allision, the situation quickly became serious for ship and crew, but at the last moment the trawler reached the nearest quayside, so that the five crew members could save themselves onto the quay. The trawler was halfway under water when the rescuers arrived at the scene, and soon all available pumps were put into operation. Timewise about 100 men were on the spot in order to prevent the "Mikkel-Louise" from sinking. Many employees from Hvide Sande Havn, the Rescue Service and volunteers from Ringkøbing and the Midtjylland Emergency Authority were summoned. During the night the ship could be dragged into lower water, and at 3:30 a.m. the forces of the Fire Rescue MidtVest could leave the port, after which the Emergency Management Agency took over the remaining work. Investigations by divers how to seal the leak were still ongoing. Danish report with photo: http://www.fiskerforum.dk/erhvervsnyt/a/Taet-paa-forlis-trawler-ramte-ydermolen-i-Hvide-Sande https://www.tvmidtvest.dk/nyheder/24-10-2018/1930/trawler-taet-pa-synke

Trawler breached in allision with jetty

The "Mikkel Louise - RI 344" (IMO: 8108092) allided with a jetty while entering the port of Hvide Sande in the night of Oct 23, 2018, short before midnight and was breached. The ship suffered water ingress, but managed to reach the nearest dock. The crew of five saved themselves. The midwest fire rescue mobilized all available pumps to keep the ship afloat. They were supported by volunteers forces from Ringkøbing and the Midtjylland Emergency Board in Herning who assisted with large pumps and 14 men. The dockers pulled the trawler further in until it could rest on the bottom at the North Port Quay, using a rubber duck. On Oct 24 at 3.30 a.m. the fire rescue could be stood down. An emergency resonse team remained on site throughout the night with six men and kept the pumps running. Oil booms have been laid out as a precaution. Divers will inspect the hull on Oct 24 to see if it is possible to patch the hole. The powerful wind was made reponsbile for the accident, pushing the trawler off course during the entry to the port of Hvide Sande. Danish report with photo: https://www.tvmidtvest.dk/artikel/gummiged-kom-trawler-til-undsaetning