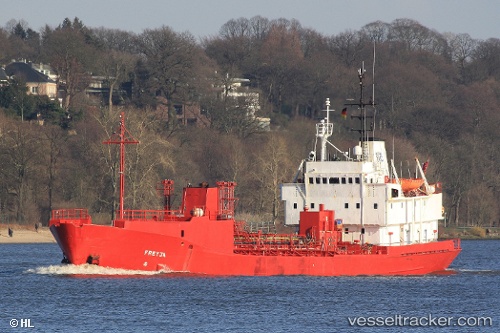 The 'Millennial Spirit' with a Russian crew on board was hit by two missiles about 12 nautical miles south of the port of Odessa near Pivdenny, injuring two people in Feb 24, 2022. One missile hit the superstructure, and another the midbody. It was unclear who had fired at the vessel. The two seriously injured seafarers were taken to hospital. The ship, loaded with 600 tons gasoline, went ablaze. Video: https://twitter.com/i/status/1497206869986787330 Report with photo: https://wydarzenia.interia.pl/raporty/raport-ukraina-rosja/aktualnosci/news-wojna-na-ukrainie-rosyjska-rakieta-trafila-w-statek-pod-band,nId,5855498

The "Freyja", having been drydocked at the Orskov Yard in Frederikshavn for repairs of the grounding damage since July 10, left the yard again on July 24 at 4.15 p.m., next being bound to Amsterdam, ETA July 27, 10 p.m.

On June 30 at 4 a.m. the "Freyja" was refloated from the Svartskjerbåen in Florø. The Bukser og Berging had deployed the "BB Power" (IMO: 9694804) with a pulling force of 130 tonnes from Stavanger, the "Stadt Sløvaag" (IMO: 8414817) was included as a support vessel. The tanker was towed to Westcon and berthed at the Fugleskjars Quay in Florø for damage surveys during the day, with the "BB Power" still alongside. She left Florø on July 8 and headed to Frederikshavn and was drydocked at the Orskov Yard for repairs on July 10 at 4 a.m. Norwegian report with photos: https://www.firdaposten.no/lokalnytt/sjoredning/stadt-sjotransport/freyja-vart-dregen-av-svartskjerbaen-i-natt/s/5-16-169570