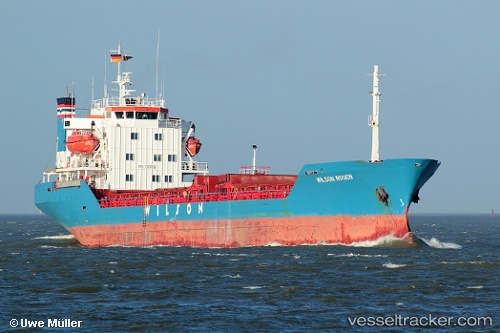 The "Mody M." which was to discharge about 6.000 tons of cement, has been detained at the Industrial Port Chemical Termnal Trieste on June 2, 2019, coming from Mersin, after a Port State Control inspection. The inspection revealed poor hygiene conditions, scarce maintenance and exploitation of personnel. A skeleton crew was obliged to work excessive hours and with inadequate working conditions. The crew and cargo areas were found filthy, with insects and other issues, which have resulted in 22 deficiencies being raised by the PSC inspectors. A fine has been imposed against the master and the ship's owners. The ship will not be allowed to sail, until it has remedied all safety standards.

Wilson has sold another ship

The "Wilson Rouen", berthed in Ceuta since June 29, 2016, has been sold to company on the Marshall Islands for $ 450,000, slightly below book value. The money the company gets from the sales is used to pay off the debt related to the ship. After the sale, the Wilson company will be operating a fleet of 116 ships, of which 79 are owned by the company. Also the "Wilson Fjord" left the fleet with losses, while the company had a tax gain on the sale of the "Wilson Marin" and "Wilson Bar". The company also started in 2016 with the sale of a ship, the "Wilson Malo".