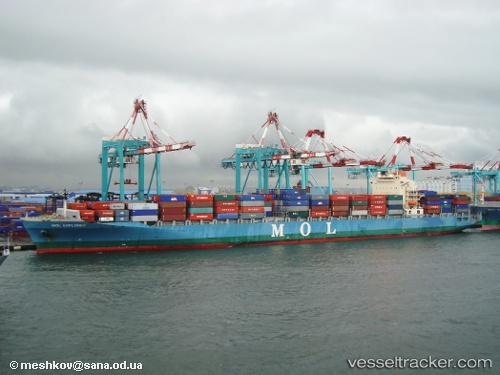 The "MOL Explorer", having sailed from Tokyo on Aug 6, was in collision with a coastal vessel off Wakayama on Aug 8, 2019, at 03.45 a.m. The brand new cargo ship was sailing in the same direction and reached the port after the collision. The container vessel dropped anchor off Wakayama. It entered the NYK Container Terminal RC-6/RC-7 in Kobe on Aug 9 at 9.30 a.m.

The Coast Guard suspended the search Sunday at 8 p.m. for a man who fell overboard from the 936-foot Korean-flagged container vessel Mol Explorer 900 miles southeast of Kodiak Saturday. Two Coast Guard Air Station Kodiak HC-130 Hercules airplane crews searched an area covering more than 1,500 square miles. The Mol Explorer and crew searched the area, but have since continued their voyage to Tokyo. "The Coast Guard suspended the search because further searching for the man will not improve the probability of success," said Lt. j. g. Eddie Michno, District 17 search and rescue controller. "Based on the information we received from the vessel the man's functional time in the water of that temperature was about eight hours. This was based on wind and water temperatures only and did not include the six-foot to 10-foot seas encountered throughout the entire search." http://alaska-native-news.com/article/Marine_News/News_At_Sea/Coast_Guard_suspends_search_for_man_overboard_900_miles_southeast_of_Kodiak/23262

The Coast Guard was searching for a crewman reported overboard the "MOL Explorer" 900 miles southeast of Kodiak Island on sep 10, 2011. Coast Guard District 17 watchstanders were notified at about 4:30 p.m. that a 49-year-old South Korean crewmember on the container ship was discovered missing at about 2:30 p.m. The man was last seen about 22 hours earlier at dinner. The watchstanders directed the launch of a Coast Guard Air Station Kodiak HC-130 Hercules aircrew to search the area for the man. It took the aircrew about four hours to transit to the search location. The "Mol Explorer" and crew were also searching the area. The Mol Explorer left Oakland, Calif., about four days before and was transiting to Toyko. Weather conditions were reported at one mile of visibility, nine-foot seas, 10 mph winds with a water temperature of 78 degrees.