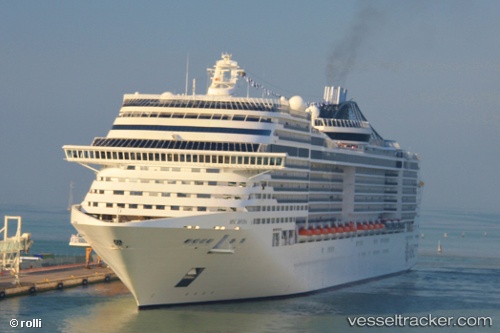 The 'MSC Divina' on June 1, 2020, moored at anchorage D of the port of Algeciras, in waters near the Ensenada de Getares, to disembark a sick crew member and, in turn, carry out tasks of fuel supply. The cruiseship remained only a few hours in this area, since the fast and effective work of the authorities allowed the sick crew member to be treated at the Quirón de Los Barrios Hospital, after which he returned on board. Health personnel, the Port Authority and the Corps of the National Police under the supervision and coordination of the Maritime Captaincy of the port of Algeciras carried out the medevac by Salvamento Marítimo as well as his his subsequent return to the cruise ship.

A 12-year-old German boy died suddenly aboard the "MSC Divini" which was sailing from Palermo to Calgliari on OCt 21, 2019. His family was quarantined in hospital. The boy fell ill and died. Coast Guard officials arrived on the scene when the ship had docked in Cagliari. The boy's parents and two brothers were taken to hospital in Sardinia where they were placed in quarantine as a precautionary measure. It was not immediately clear how long they would be in quarantine. Authorities had been alerted to the boy's death but no investigation was launched as medics had determined the cause of death had been natural. The boy had reportedly been feeling ill during the first stop of the cruise in Civitavecchia on Oct 20. He underwent a medical examination and then continued the journey with his family as the ship headed to Palermo the following day. Related Stories From there, the ship set sail for Cagliari, and the boy's condition deteriorated. He died while the ship was still three hours from the island's southern coast. The "MSC Divina" has since continued on its journey around the Mediterranean.

Passenger was rescued after going over board

On Sep 26, 2019, a passenger went over board from the 'MSC Divina' around 6 a.m. while the ship was sailing towards Valencia. The person was apparently in the water for well over an hour in the Meditteranean Sea. One of the ship’s lifeboats was launched to the rescue and pulled him out of the water again. The 'MSC Divina' was sailing a seven-day Meddittereanan cruise and had departed Palma de Mallorca with an ETA at Valencia at 8 a.m. Report with photo and video: https://www.cruisehive.com/cruise-passenger-rescued-after-being-overboard/34807