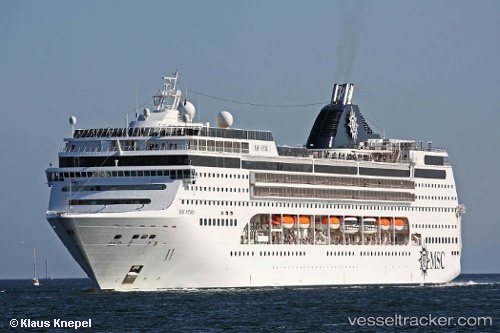 Captain sentenced to five months in jail for Venice accident

After the accident of the 'MSC Opera' in Venice on June 2, 2019, the captain has now got a five-month prison sentence. The chief engineer, the chief electrician and two other crew members were also punished. The ship, while transiting the Giudecca Canal towards the San Basilio cruise terminal, allided with the river cruise ship 'River Countess' and the pier and caused considerable damage. The court found that a number of mistakes by the ship's crew led to the accident. MSC Cruises, on the other hand, blamed the shipyard, the French Chantiers de l’Atlantique. The prosecutor and defense have now agreed on a five months' imprisonment for Captain Carmine Siviero, two months each for the chief engineer and the chief electrician and ten days each for two other crew members. Captain Carmine Siviero has been with MSC Cruises since 1992 and began his career as a deck cadet on the 'Achille Lauro'. At the time the 'MSC Opera' was being built, he was working for MSC to monitor and accompany newbuildings in the shipyard in Saint-Nazaire. He has been Staff Captain since 2009 and Master since 2018. At the time the allision a warning signal appeared on the surveillance monitors of the 'MSC Opera' before entering the Venice lagoon, indicating the failure of an electrical module in the main switchboard. Among other things, the module was responsible for supplying energy to the bridge and controlling the speed of the propellers. The technical officer and the chief engineer have ignored the warning signal, although the problem could have been solved simply by flicking two switches. Instead, the power supply for the connected control elements took place for about an hour with an emergency power battery, the energy reserve of which was finally exhausted shortly before the accident- Due to the failure of the emergency power supply, the ship was unable to maneuver and it was no longer possible to regulate the speed of travel. As a result, the 'MSC Opera' hit the 'River Countess' at the San Basilio cruise terminal and scraped along the pier until it could stop. Four people were injured in the accident. Some passengers of the river cruise ship were able to save themselves ashore via the gangway at the last second. The 'MSC Opera' was also sailing a little too fast at the scene of the accident, namely at 6 instead of the permitted 5.8 knots. The ship had already sailed with 8 knots instead of the 6 knots allowed there on a stretch of the route before. MSC Cruise had admitted the malfunction in court, but stated that the alarm had not been displayed on the surveillance monitors. As a result, after noticing the problem, the crew had very little time to intervene. This was a technical failure and thus a mistake for which the shipyard was responsible. The captains of the two tugs “Ivonne C” and “Angelina C” which were connected to the 'MSC Opera' were exonerated, they were not to blame for the accident. According to the expert opinion, they had done everything to stop the ship and had avoided significantly more serious consequences. Other initially suspected crew members such as the officer on watch, the co-navigator and the security officer were also exonerated in the process. The trial concerned the criminal aspects of the accident. Claims for damages had already been settled between those involved in the accident and the insurance companies.

The allsion of the 'MSC Opera' with the 'River Countess' in Venice on June 2, 2019, was caused by the captain’s incompetence, a report lodged with the public prosecutor by three Italian navy experts revealed. The navy’s report laid the blame squarely on the 'MSC Opera'’s captain and crew, who, it says, were inadequately trained to deal with an emergency. The ship sailed under its own power into Venice and turned left into the Giudecca Canal, when its steering failed. This was communicated to the bridge, but not by the captain to the pilots who came aboard shortly afterwards. The captain failed to press the button that would have stopped the engines instantaneously, so the tugs were unable to control the ship’s trajectory, the hawser to one of them snapping. Fortunately, the ship struck the bankside at an oblique angle, and it was strong enough to resist the impact.

The 'MSC Opera' rameind berthed in Genova with 166 staff members on board. On March 28 a hospitalized seafarer died because he was positive. One former Passenger died in the night in hospital in Genova where he had been hospitalized after he was tested positive.