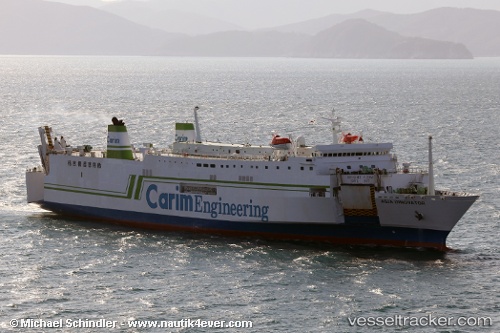 The National Transportation Safety Committee (NTSC) launched an investigation into the fire abaord the "Mutiara Persada III" in the Sunda Strait off Tunda, Serang regency, in the morning of Apr 9. Five officers were taken to the ship with patrol boats from the port of Indah Kiat m. Officers of the National Committee Kesselamatan transportation (NTSC) went to the vessel with from the port of Tanjung Priok, Jakarta-Port of Panjang, Bandar Lampung. The ferry had been able to return to Lampung carrying 76 passengers and 37 crew members after the fire, escorted by the "Mutiara Barat". Indonesian reports with photos: http://www.tangeranghits.com/mega-metropolitan/berita/51749/km-mutiara-persada-iii-terbakar-di-perairan-selat-sunda http://www.tangeranghits.com/mega-metropolitan/berita/51795/knkt-investigasi-terbakarnya-kapal-mutiara-persada

Ferry on fire in the Sunda Strait

On Apr 9, 2017, at 9.20 p.m. a fire broke out in a car on the cargo deck of the "Mutiara Persada III" while the ferry was en route from Jakarta to Panjang port in the Sunda Strait, west of Jakarta. The ferry dropped anchor near Pulau Tunda island, and the 76 passengers were mustered at upper deck, awaiting evacuation. The fire was extinguished on Apr 10 at 1 a.m., with three cars having been destroyed. The alerted rescue teams were still busy with cooling and extinguishing still smouldering spots. A rescue ship, a tug and the passenger vessel "Mutiara Timur 1" were on site to assist.

Ferry ran aground after engine failure

The "Mutiara Persada III" was disabled after an engine failure on July 13, 2015 while en route from Surabaya Eto Lampung. The ship drifted to zjr small island Pulau Tempurung in the Sunda Strait and ran aground. There were 142 passengers on board, including trucks drivers, all were evacuated by boats and transferred to Merak. Obviously water had spilled into the fuel lines. Indonesian report with photo: http://nasional.tempo.co/read/news/2015/07/14/058683724/kapal-mutiara-persada-iii-kandas-di-selat-sunda