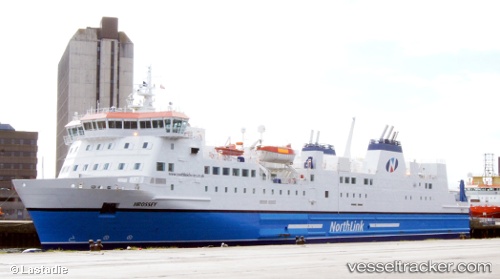 The 'Hrossey', en route from Aberdeen to Lerwick with 331 people on board, suffered a pitch indication caption failure on the port side main engine in position 57 09 06N, 002 02 06W, about 1,2 nautical miles off Aberdeen on July 19, 2021, at 6.40 a.m. The issue was resolved by the engineer on board, and the ship continued is voyage to the Blaikies Quay.

The 'Hrossey' was diverted to help a rescue operation after a catamaran capsized off the Aberdeenshire coast with two people on board off Cruden Bay on July 17, 2021. The ferry launched a fast rescue craft which helped one person from the water. A small local fishing boat which also responded helped the other person. They were taken ashore by Peterhead lifeboat. Report with video: https://www.bbc.com/news/av/uk-scotland-57890540

Ferry diverted due to fouled propeller

The 'Hrossey' got its propeller fouled while enroute to Aberdeenin the morning of May 4, 2021, which prevented the ferry from being able to dock. Poor weather at the time also hampered the attempts to reach the harbour. The vessel was diverted to Scrabster, where she arrived at 8.15 p.m. Divers attended the ship, and on May 5 at 8.30 a.m. it left the port again towards Lerwick with an ETA as of 4.30 p.m.