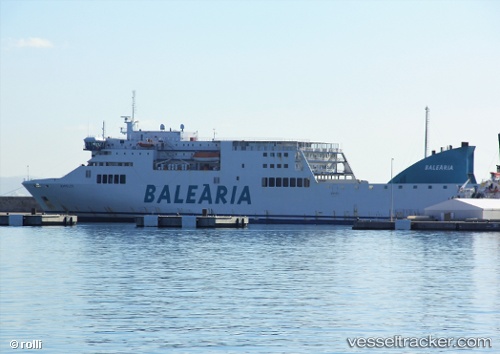 The “Nápoles”, which covers the Malaga-Melilla de Balearia line, suffered a collision on March 12 at 03:00 a.m. with the Hongkong flagged container ship “Laust Maersk”, 50688 gt (IMO: 9190743), which was en route from Algeciras to Taranto with an ETA as of March 14, in the waters of the Alboran Sea. One container got stuck next to the port side bridge wing the ferry and it had serious damages at the port side bow. No personal injuries have been reported. The accident has been reported to the Almeria MRCC, and the protocols established for these cases have been activated. The “Nápoles”, which will be replaced by her sister ship “Sicilia”, arrived in Melilla at 06:30 a.m., and after disembarking the passengers, work was now being done to remove the container and assess the damage before the damage will be repaired at a shipyard. Report with photos: https://www.puentedemando.com/el-ferry-napoles-colisiona-de-madrugada-rumbo-a-melilla/

The repair of the "Napoles" in Algeciras will take about four weeks in dry dock. To replace the "Napoles", the shipping company Balearia Eurolineas Co. Ltd. inserted the Maltese ferry "Bahama Mama" (IMO: 9441142) to Algeciras with a capacity for 1000 people and 126 vehicles which will make between three and four rotations between the ports of Algeciras and Tangier Med for the time being. The repair work was completed on Aug 10, and the ship left the port at 10.50 p.m. bound to Tanger Med where it arrived on Aug 11 t 12.20 a.m. and resumed its schedule between the two ports. Spanish report with photo and video: https://www.elestrechodigital.com/2019/08/05/el-napoles-estara-unas-cuatro-semanas-en-dique-seco/

The "Napoles" which covers the line between Algeciras and Tangier Med, and the container ship ‘Carolina Star’(IMO: 9210062) were in collision two miles off Tangier on July 31, 2019, around 3 a.m. The port side foreship of the container ship and the starboard side stern of the ferry which was coming from Algeciras at the time of the clash suffered damages. The ferry managed to berth in port where passengers and vehicles were disemarked. While the ferry was taken out of service due to the damage suffered, the route between Algeciras and Tangier Med, howver, continued to operate normally with another ten ferries. The "Napoles" was to be repaired in Algeciras as soon as possible. She was a reinforcememt ferry and had been shifted from its usual route Huelva-Canarys, makng for trips a day. The "Carolina Star" had also come from Algeciras, where it had sailed on July 30 at 12.40 p.m. Both ships berthed in Tangier-Med at 3.20 a.m. The ferry left the port on Aug 1 at 1.20 a.m. It berthed at the roro berth of the Principale Felipe Quay in Algeciras at 2.35 a.m. The bulkcarrier left the port of Tangier on Aug 1 at 3.30 p.m. and headed to Algeciras, where it berthed at the Cernaval Group Shipyard in Campamento at 7.50 p.m. for repairs of the bow damage. Reports with photos: http://estrecho.8directo.com/2019/07/31/la-ope-pierde-al-ferry-napoles-tras-chocar-portacontenedores-carolina-star-tanger-med/ https://forum-schiff.de/phpBB3/viewtopic.php?f=2&t=23&p=161827#p161827 https://www.elestrechodigital.com/2019/08/01/el-napoles-ya-esta-siendo-reparado-en-algeciras/ https://elfarodeceuta.es/ferry-algeciras-tanger-colisiona-carguero-aguas-marroquies/ http://www.shipspotting.com/gallery/photo.php?lid=3037607