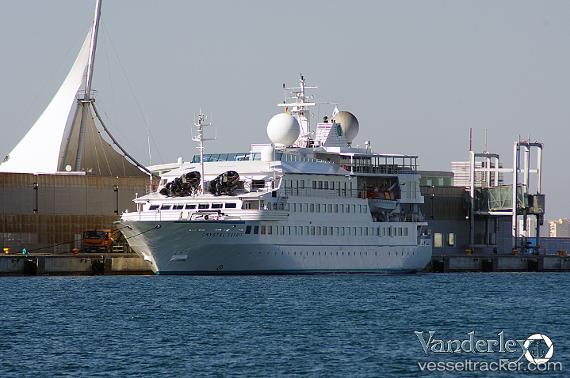 12 French nationals were rescued on Feb 19, 2017, as the result of a joint effort of the Seychelles Coast Guard and the" Crystal Esprit". The Seychelles Coast Guard received a call from the cruise ship at around midnight on Feb 17, informing them that the catamaran "El Diablo" was in distress close to Praslin. Three children and nine adults were onboard the catamaran, which was dragged from its mooring buoy and ran aground close to the shore. The area was experiencing extremely bad weather which caused excessive damage to the catamaran and had to be abandoned. The Coastguard deployed ships to assist which worked jointly with the crew of the "Crystal Esprit" in darkness and heavy rain to carry out the rescue operation. The distressed "El Diablo" sank, and the owner was making arrangements to have the ship removed. The "Crystal Esprit" departed for Aride, the northernmost granitic island of Seychelles, an archipelago in the western Indian Ocean on Feb 18 as planned. The rescued passengers from the catamaran were transferred to Praslin. Report with photo: https://www.cruiseindustrynews.com/cruise-news/16427-crystal-esprit-performs-seychelles-rescue.html

Crystal Yacht Expedition Cruises will not send Crystal Esprit back to the Seychelles for a third cruising season in 2017, nor to the Adriatic in 2018. Instead, the luxury cruise line will redeploy the 62-passenger yacht year-round to the Caribbean, beginning November 2017. Crystal Esprit will offer two itineraries out of Marigot Bay, St. Martin, beginning late 2017 and carrying through all of 2018. The "Yachting Escape" itinerary features destinations such as Jost Van Dyke, Virgin Gorda and Tortola, while the "Yachting Explorer" itinerary visits Anguilla, Saba and Nevis, among others. Since its debut late 2015, Crystal Esprit has wintered in the Seychelles, an archipelago in the Indian Ocean, and summered in the Adriatic, sailing between Athens, Venice and Dubronik. http://www.cruisecritic.com/news/news.cfm?ID=7345

The christening of the CRYSTAL ESPIRIT marks the first step in Crystal Cruises’ massive expansion. On Sunday, Dec. 20, 2015, Crystal Cruises’ newest addition, the CRYSTAL ESPIRIT was christened at Eden Island Marina in Mahé, Seychelles. In a ceremony attended by Crystal executives and VIPs, the yacht’s Godmother, Lady Gaenor Anne Meakes (fiancée of renowned yachtsman Mark Richards), sent a magnum of Louis Roederer Crystal Brut 2004 crashing into the ship’s bow. The 62-guest, 3,370-gt vessel will feature a two-passenger submarine, four zodiacs and a 12-guest tender for luxe expeditions. Source and some pictures at http://maritimematters.com/2015/12/crystal-espirit-christened/