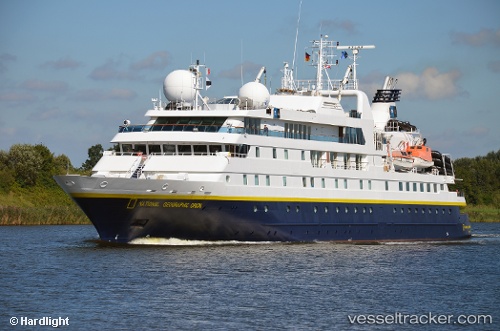 The "National Geographic Explorer" which had been stranded for almost a month due to a fault at the main engine which occurred on Dec 27, 2016, 95 nautical miles of the port of Ushuaia upon returning from a trip to Antarctica, was now on his way to a Dutch shipyard for repair. The ship had 117 passengers and 65 crew members on board. The auxiliary generators were put into operation to reach Ushuaia with the emergency propulsion at a speed between 4 and 5 knots and managed to reach the capital on December 29. The vessel was anchored for almost a month in Ushuaia Bay before being floated onto the "Rolldock Storm" on Jan 27, 2017. The ship had entered port on Jan 25. The "67 Río Uruguay and "81 Canal Beagle" of the Coastguard supported the unpredencented operation which lasted seven hours with rescue swimmers. The ship will now be fixed another two days before the journey to Eruope may start. Repairs were expected to last until April. Spanish reports with photos: http://www.surenio.com.ar/2017/01/rescate-al-crucero-national-geographic http://www.lacapital.com.ar/inusual-maniobra-ushuaia-reparar-un-buque-investigacion-n1329426.html

The "National Geographic Orion" suffered an engine failure on Dec 27, 2016, which has forced the ship to cancel a number of its upcoming Antarctica sailings. All passengers and crew were safe. The incident took place as the ship was leaving the Antarctic Peninsula on its return to Ushuaia. The ship was now on its way back to port through the Drake Passage at reduced speed. In order for the ship to undergo its necessary repairs, the Dec 27 departure, as well as all January departures, have been canceled. A team of engineers has been dispatched and was on their way to Ushuaia to assess the full impact of the technical issues. Once the evaluation has been completed, Lindblad Expeditions will release additional information. Passengers onboard when the incident occurred will receive reimbursement for any costs incurred due to their late arrival into Ushuaia, as well as a $1,000 credit toward future travel with Lindblad. Those who had already traveled to Santiago for the Dec 27 departure will receive a 100 percent refund (including airfare) as well as a full credit in the amount they paid, for future travel.

In March 2015, Tropical Cyclone Pam hit Vanuatu, causing damage to villages, primarily on the southern islands. Tanna Island was one of the hardest hit, and relief efforts have been ongoing. The 102-guest expedition ship National Geographic Orion was the first ship, besides relief and cargo ships, to call at Port Resolution, which marked a significant occasion for the people of Tanna. http://www.huffingtonpost.com/lindblad-expeditions/vanuatus-tanna-island-dev_b_8493634.html