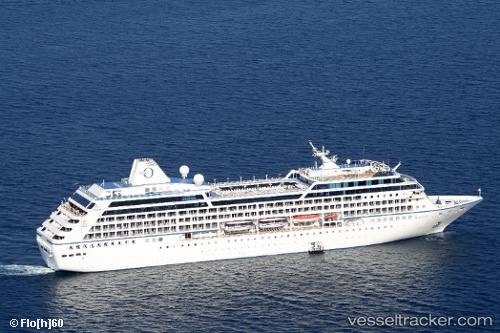 Person went missing over board off Turkey

In the night of Aug 28, 2022, a person went missing from the 'Nautica', en route from Valletta to Istanbul. The ship circled for some hours, and Turkish police went on board the ship after it docked in Istanbul on Aug 29 at 4.55 a.m. The ship had left Barcelona on Aug 15 with calls at Mahon, Monte Carlo, Porto Torres before reaching Valletta on Aug 25.

Since the afternoon of Sep 19. 2018, the "Nautica", having broken lose from its moorings at 11 a.m. and being held at sea, was assisted by the tugs 'Anglegarth‘ and 'Ayton Cross‘. They pushed the cruise ship against the quay of the Greenock Ocean Terminal until the wind abated. 478 passengers and 26 crew members were ashore when the ship broke lose in gusts of up to 90 m/h, caused by storm Ali. They were being looked after by the shore operations teams until conditions were safe enough for the vessel to be returned to the passenger terminal. The Greenock Town Hall was made available to passengers looking for shelter until conditions were safe enough for the vessel to return to the terminal at 9 p.m. Staff from Inverclyde Leisure and Inverclyde Health and Social Care Partnership assisted, and the passengers were even entertained by a piper. The vessel is on a 12-night British Isles cruise. The ship arrived in from Edinburgh and was bound to Belfast after the Clyde. Reports with photos and video: https://www.express.co.uk/news/uk/1019797/storm-ali-scotland-greenock-cruise-ship-Oceania-Cruises-nautica http://uk.businessinsider.com/storm-ali-cruise-ship-with-people-on-board-torn-scotland-moorings-2018-9?r=US&IR=T https://www.bbc.co.uk/news/av/uk-scotland-45575861/liner-breaks-free-as-storm-ali-hits-scotland https://www.inverclydenow.com/news/local-news/cruise-ship-detaches-from-dock-at-greenock-during-storm https://www.greenocktelegraph.co.uk/news/16889088.storm-ali-drama-as-cruise-ship-breaks-free-at-greenock/