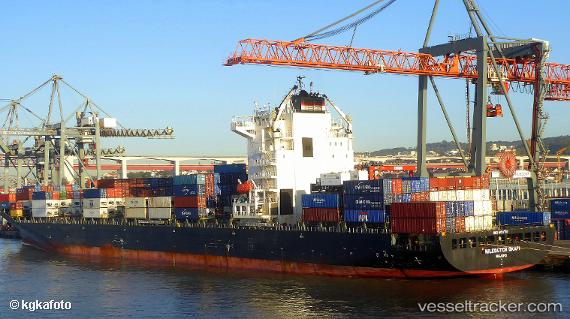 Suppliers looking to recover outstanding bunker costs from bankrupt carrier Hanjin have been told by the New Jersey Bankruptcy Court they can not arrest any more of its vessels.Notably, the ruling by Judge John K. Sherwood protects both owned and chartered Hanjin vessels from arrest.World Fuel Services (WFS) and OceanConnect Marine (OCM), in addition to a number of tug and other service providers, had asked that the September 9 decision be reconsidered, but last Thursday Sherwood rejected that motion and said the operator's vessels were free to sail. He had previously requested they stay in U.S. waters. World Fuel objected to being enjoined from executing against or further arresting vessels that the debtor does not ownChief among the objections is the extension of bankruptcy protection to the owners of Hanjin's chartered vessels, with lawyers acting on behalf of the affected companies saying the decision is contrary to both U.S. and South Korean law."World Fuel never objected to the vessels entering ports and unloading," said WFS' lawyers."World Fuel objected to being enjoined from executing against or further arresting vessels that the debtor does not own."Still, prior to Judge Sherwood's original ruling, WFS was able to secure the arrest of Hanjin Montevideo on September 6, from which it is seeking $488,749.43, plus interest, fees, and costs.OCM, who has also targeted Hanjin Montevideo, on September 6 secured the arrest of the Hanjin-chartered Seaspan Efficiency in Savannah, Georgia, with court records showing it is seeking "at least USD 837,338.76, plus prejudgment interests, costs and other and further proper relief.The total amount owed to bunker companies by Hanjin is still not known, with the full list of creditors not expected to be released until next month.However, Adrian Tolson, Senior Partner, 20|20 Marine Energy, has estimated that, based on historical knowledge and fleet size, the bunker industry is exposed to a possible immediate financial hit exceeding $100 million. source: Ship & Bunker News Team

The "Hanjin Montevideo" was seized by U.S. Marshall’s officers, officials confirmed on Sep 7. Two fuel suppliers teamed up to lay a claim last week on the ship which has been sitting inside the breakwater. Claims filed in U.S. District court argued that the company owes suppliers about $775,000 for fuel in the ship’s tanks. The arrest order allowed the ship to enter the port, but prevented it from leaving.