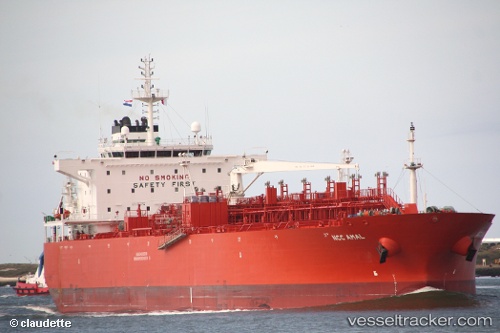 Perpetrators tried to board tanker off Pulau Cula

Four perpetrators from a small boat attempted to board the 'NCC Amal' from the starboard quarter, while it was underway in position 01 02 57N, 103 38 00E, approximately 4.9 miles west off Pulau Cula, Indonesia,on Oct 25, 2019, at 05.15 a.m. The alarm was raised and the attempt by the perpetrators to board the tanker was aborted. The perpetrators boat sped away and left the area. The Master of the tanker reported the incident to the Singapore authorities. The tanker then resumed its voyage with all its crew members in safe condition.

Bahri, a global leader in logistics and transportation, announced the transportation of the first chemical shipment from Aramco Trading Company (ATC), a wholly-owned subsidiary of Saudi Aramco that trades refined, liquid chemical and polymer products, via ‘NCC Amal,’ a 45,000 DWT Bahri chemical tanker which left Port of Rabigh heading to China.

The National Shipping Company of Saudi Arabia announced its 80%-owned subsidiary The National Chemical Carriers Ltd. Co. (NCC) took delivery the 45,000dwt chemical tanker NCC AMAL from South Korean SHINAsb (previously SLS), the shipping company said. The tanker is part of 9 vessels previously contracted by NCC from the shipyard during 2006 - 2007 for a total value of approximately SAR 1,721m. The financial impact of the delivered tanker on the company revenue will appear starting third quarter of the current financial year. NCC has additional 8 vessels under construction at SHINAsb in South Korea for a value of SAR 1,538 m with deliveries expected during 2011/12, in addition to one large chemical tanker of 75,000 DWT, to be constructed at Daewoo Shipbuilding and Marine Engineering Co. Ltd. (DSME) of South Korea at the price of approximately SAR 247m for delivery during 2013.