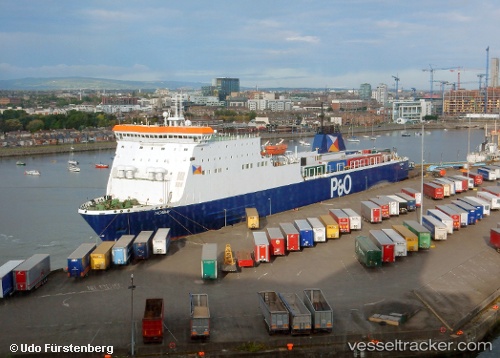 Another P&O ferry, the 'Norbay' was being inspected on April 20, as the company tried to resume normal operations after sacking nearly 800 seafarers. The Maritime and Coastguard Agency (MCA) has started assessing th ship in the Gladstone Dock in Liverpool, where it has been sidelined since March 17. P&O Ferries hopes the ship will be able to restart sailing on the Liverpool-Dublin route. Eight of their ships will be examined by the MCA after the massive looting to ensure it meets international standards for manning and safe operation, particularly emergency procedures such as firefighting and evacuation. The 'Spirit Of Britain' and 'Pride Of Kent' remained detained after safety concerns were found.

The 'Norbay' left Liverpool in the night of April 21 at 11.40 p.m. after four days stranded in Seaforth following the bust-up which left crucial supplies in limbo. Top level talks have been ongoing since April 9 following a dispute with Peel Ports, who own and administer the dock facilities of the Port of Liverpool, and who demanded a cheque for nearly £600,000 of what they claimed were outstanding fees. P&O disagreed with that figure, believed it was two thirds that amount, and asked for flexibility to pay the bill at a time when they are losing many tens of thousands pounds a day in revenue due to the global pandemic lockdown. The shipping company also added that their key contact at The Mersey Docks and Harbour Company had been furloughed without their knowledge, interrupting their communications. Now, an agreement has been reached, allowing the 'Norbay' to set sail within the next few hours. The argument sparked anger as P&O were transporting food, medicines and other goods back and forth between Dublin and Merseyside to be supplied to the city and also the north of England. Over the weekend, the impasse deepened with two more ferries also stranded at Dublin Port amid the ongoing stand-off between the company and the Port of Liverpool. On the other side of the Irish Sea, two freight ferries - one owned by P&O and the other chartered by the company - were also unable to set sail for Liverpool because of the row. As the company hastily tried to pursue alternatives, the 'Norbank' was seen on Sunday undertaking berthing trials at the Port of Mostyn in Flintshire. The row was escalated to government circles in Ireland, with a senior official in the Department of the Taoiseach in Dublin saying if the dispute became protracted it could have implications for the supply chain in Ireland. Peel Ports were expected to release their statement shortly.