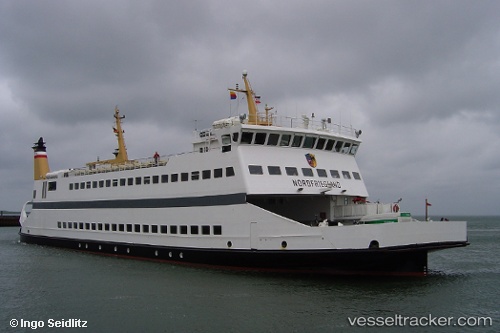 On March 4, 2018, the lifeboat "Ernst Meier Hedde" of the DGzRS station Amrum was called to assist the "Nordfriesland" off the island. At 10.10 a.m. the ferry had suffered a failure of both main engines in the Rütergat near buoy 14. On board was a crew of nine and no passengers after a yard stay in Husum on the return trip to Wyk upon Föhr. The ferry dropped anchor to avoid drifting further out of the main fairway in the ice. The lifeboat took the ship in tow. 45 minutes later the crew of the ferry was able to fix the trouble, and the ship continued the voyage to Dagebüll with own power under escort of the lifeboat. The "Nordfriedsland" berthed in Dagbüll at 2.45 p.m. German reports with photos: http://www.schiffsjournal.de/dgzrs-seenotretter-kommen-der-manoevrierunfaehigen-inselfaehre-nordfriesland-zu-hilfe/ https://www.shz.de/lokales/husumer-nachrichten/maschinen-ausfall-im-eisigen-meer-id19244061.html

Crew member fell over board in Wyk

On Dec 26, 2016, an crew member of the "Nordfriesland" fell into the water at noon during the mooring operation of the ferry in the port of Wyk upon Föhr. A colleague was able to pull the man, who was wearing a life vest, quickly out of the water. He was injured when he got between the ship and the dolphins in the port, but was conscious. He was taken to hospital in Flensburg by helicopter.

The fire rescue Wittdün upon Amrum was alerted in the morning of July 27, 2015, after a truck had pulled a trailer from the "Nordfriesland" at 9.20 a.m. at the ferry dock. The driver noticed a damage to the truck and that wide areas of the ferry landing were contaminated with oil from the hydraulic system of the vehicle. The 25 volunteers of the fire rescue used oil binders, but strong wind and rain complicated the attempts to remove the oil. It took them 2,5 hours to bind the leaked oil and dispose of properly. The multifunctional vehicle of Amrum Wittdün-tourism and a motor sweeper assisted in the work. The access road was completely closed during this time. The floor conveyor of the type "ZD 6" was shipped in a container and transported by ferry to the repair shop in the afternoon. German report with photo: http://www.shz.de/lokales/insel-bote/ausgelaufenes-oel-ruft-feuerwehr-auf-den-plan-id10319136.html