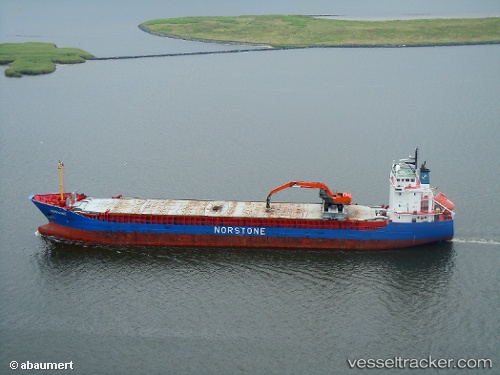 On Jan 25, 2019, at 4 a.m. the "Norvind" was in collision with the container m/v "Beate" off Rügen island, about 15 kilometers east of Sassnitz. On scene were SW wind forces of 3-4 Beaufort with snow fall and calm sea. The "Norvind" suffered significant water ingress when being holed at starboard side at the height of cargo hold 1. The captain radioed a mayday and prepared to evacuate the ship. Besides the lifeboats of the DGzRS stations Sassnitz and Greifwalder Oie also a helicopter of Northern Helicopters was alerted by the MRCC and a mayday relay was radioed to ships in the vicinity. The water ingress could, however, be coped with the ship's own pumps. A leak was torn at the height of the water line, the damage underneath the water line was yet unclear. The crew of 10 aboard the "Norvin" and the 13 seafarers on the "Beate" were not injured. Both ships headed to Sassnitz-Mukran port with slow speed, escorted by the lifeboats "Vormann Jantzen" and "Berthold Beitz". The "Norvind" reached the port at 7 a.m., followed by the "Beate" which had suffered only slight damage at the forepeak and docked at berth 7 in Mukran. The local fire rescue was ready to continue pumping water out of the cargo hold of the "Norvind" which had been underway from Sassnitz-Mukran, where she had sailed at 2.50 a.m. to Gdansk. The "Beate" had been underway from Szczecin, where she had sailed on Jan 24 at 10.20 p.m., bound to Bremerhaven with an initial ETA as of Jan 26, 6 a.m. The "Beate" left the port of Mukran again at 3 p.m. on Jan 25 despite its bow damage and headed to Bremerhaven before entering the Norder Yard in Hamburg for repairs on Jan 29. The "Norvind" which suffered a hole of 4x4 meters in its hull, left the port of Mukran on Jan 29 at 4.30 p.m. and headed to Gdynia. She berthed at thre Stocznia Dockyard on Jan 30 at 10 p.m. T. The police launched an investigation against the captain for negligence. He disregarded the right of way accodring to initial investigations. Also the officer at the helm of the "Beate" was subject of investigations as he did not enough to avoid the collision. The damage was at least in the 6 digit-scale. The "Beate" left the Norder Yard in Hamburg after repairs on Feb 15 and berthed at the Container Terminal Altenwerder in Hamburg at 9.45 a.m., next being destined for Bremerhaven, ETA Feb 16. German reports with photos: https://www.lahrer-zeitung.de/inhalt.unglueck-in-der-ostsee-rechts-vor-links-missachtet-frachter-kollidieren-vor-ruegen.680e1f22-0512-431e-b8b1-c0a213975e30.html http://www.kn-online.de/Nachrichten/Panorama/Seenotkreuzer-im-Einsatz-Zwei-Frachter-kollidieren-vor-Ruegen https://www.svz.de/regionales/mecklenburg-vorpommern/Frachter-kollidieren-vor-Ruegen-Wassereinbruch-unter-Kontrolle-id22390612.html https://www.ndr.de/nachrichten/mecklenburg-vorpommern/Zwei-Frachter-vor-Ruegen-kollidiert-,frachter610.html https://www.seenotretter.de/presse/ansicht/news/seenotretter-fuer-zwei-kollidierte-frachtschiffe-im-einsatz/

On June 15, 2015, the "Norvind" assisted a distressed 54-ft-cabin cruiser which took on water at 4 p.m. in rough seas with two people on board 4-5 miles east of Lindesnes lighthouse. Following the distress call also the lifeboats "Ægir" from Farsund as well as the "Bill" and "Sundt" from Mandal were dispatched. When they arrived, the "Norvind" had already taken alongside the boat and tied it to the hull so that it could not sink. The cabin cruiser had taken in a lot of water, the engine room was flooded and the stern submerged. Two rescuers boarded the boat with pumps to drain the water. At 5:30 p.m. the ship was stabilized so far that it could be towed to Høllen alongside the "Ægir" and escorted by the "Bill". Norwegian report with photo: http://www.aftenbladet.no/nyheter/lokalt/agder/Cabincruiser-tok-inn-vann-utenfor-Lindesnes-3719636.html

After the grounding off Jomfruland on Nov 24, the captain was critziesed for not having called the emergency service at Tjøme Radio after the ship got stuck at 10 p.m. Tjøme Radio did not take notice before midnight which was said to be very unusual. It was the first time a Norwegian captain did not do this after having run aground in these waters. as the radio has a list of rescue boats in the area. Within short notice they can get tugs, rescue boats, boat services and the Rescue Coordination Centre at Sola. But the 38-year-old captain contacted the company Karmøy Skipsconsult instead, and Tjøme Radio was first notified of the grounding by the traffic center in Brevik two hours after the accident. By a misunderstanding Karmøy Skipsconsult sent an e-mail first to Horten VTS at 10.40 p.m. When they discovered the error, they sent it to Brevik VTS whichis responsible for this area at 10.55 p.m. Short time later, a tug was sent, but it had to stop at Langesund to get a pilot. In the meantime, the "Norvind" already refloated at 1.40 a.m. on Nov 24. The same afternoon, divers examined the hull of the "Norvind" for a damage survey. None of the crew of nine were injured during the incident. The ship remains at Kragerø where it is intended to load a cargo of stone bound for Denmark. Norwegian report with photo: http://www.nrk.no/nyheter/distrikt/ostafjells/telemark/1.7889447