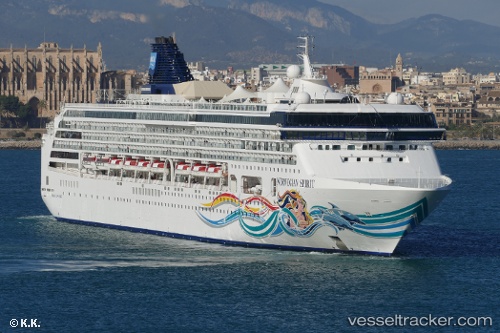 In a major endorsement of the skills of Marseille-based shiprepairer Chantier Naval de Marseille (CNdM), Norwegian Cruise Line has placed its USD 100 million upgrade of NORWEGIAN SPIRIT with the French shipyard.

Passengers furious after cruise ship had to skip several ports

The "Norwegian Spirit" had to skip several port calls after its departure from Southampton on Sep 27, 2019. The ship was sheduled to call at Amsterdam, Le Havre Bergen, Flam and Geiranger as well as e Akureyri and Reykjavík before returning to Belfast and Dublin. Due to inclement weather Amsterdam had to be skipped as well as Le Havre, and the ship headed directly to Norway where the ship berthed in a 'deserted' town which was closed to tourists, with the famous fjords viewable only from a distance. A stop in Reykjavik was cancelled and replaced with a trip to Greenock, near Glasgow – but the ship was refused permission to dock there in the morning of Ovt 7, and the captain decided to head to Belfast instead. By this point, passengers had endured three days at sea and the ship's sewage system was failing. Many passengers said food served in the restaurants had gone stale. There was further fury when US-based operator Norwegian Cruise Line declined full refunds and offered passengers only a 25 per cent voucher towards a future cruise. Hundreds of the 2000 passengers were protesting in the ship's grand atrium amid chants of 'shame on you', 'we want refunds' and 'get us off this ship'. The passengers, including British, American and Chinese tourists, can be heard shouting 'take us back to London' in front of crew members and security guards. One demanded: 'I want to see the captain. He should be out here.' Security was pulled out and they were threatening to arrest several passengers. Many passengers left the ship after it stopped in Belfast on Oct 7 and decided to make their own way back to London. A spokesman for Norwegian Cruise Line said: 'Norwegian Spirit was forced to cancel her call to Greenock due to weather conditions as well as a delay caused by a departing Navy vessel that experienced a technical malfunction.' Reports with photos and videos: https://www.bbc.com/news/uk-49987767 https://www.dailymail.co.uk/news/article-7551905/Cruise-ship-passengers-5-300-mystical-fjords-tour-rebel-tell-crew-want-liner.html