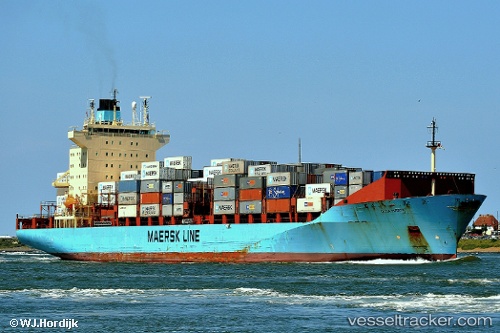 The repair time for the "Olga Maersk" which was hit by a fire in the engine room while on its way from Panama to Cartagena on Jan 29 120 miles northeast of Colon, will be extended to February 23. Provided the ship's repair has been completed on that date, the vessel will be 8-9 days behind the sailing schedule and therefore be overtaken by the "Spirit of Sydney" on journey 907S. The two container ships will exchange space in the rotation of the Australia/New Zealand service via Panama. Once repaired, the "Olga Maersk" will call Manzanillo, Panama, Cartagena, Colombia and Manzanillo, Panama to load dry cargo left from week 7 and 8. After the fire, the "Olga Maersk" resumed the voyage, but instead of planning to sail to Cartagena, it turned around and sailed back to Colon to be repaired. It has been in the shipyard since. Initially it was hoped that the ship could be sailing around Feb 16.

The "Olga Maersk" suffered a fire in the engine room on Jan 29, 2019, around noon while the vessel was on route from Panama to Cartagena, 120 miles NE of Colon, Panama. The crew, being safe and accounted for, managed to extinguish the fire, but the ship started moving only on Jan 30, and turned back to Colon and berthed in Cristobal on Jan 31 at 5.45 p.m. No injuries were reported.

A mechanical problem with a crane in Sydney delayed the arrival of the "Olga Maersk", which had left Auckland from New Zealand on Nov 21, 2017. Therefore she sailed to Melbourne before the Sydney call to minimize the delay. The change of the sailing plan will not extend the stay in Melbourne, ETA Nov 25, while the delay of the Sydney call meant that the ship's containers would not be handled at the DP World Australia's Sydney Terminal on Nov 24, where the ship should have berthed.