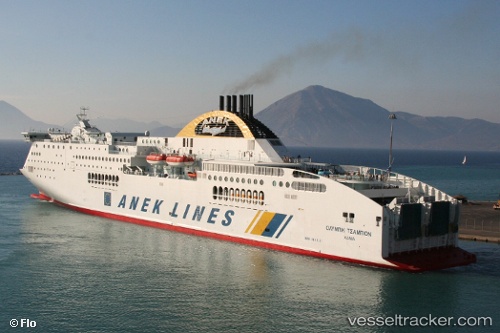 The Port Authority of Corfu was informed in the early morning hours of Sep 1 by the Master of the 'Olympic Champion' about the death of a 66 year old passenger while the ship was en route from Ancona to Corfu. He was found dead inside the cabin. The body was transported by ambulance to the General Hospital of Corfu, while the Central Port Authority of Corfu, which was conducting the preliminary investigation, ordered an autopsy.

The Central Port Authority of Igoumenitsa was informed in the evening of Agu 22, 2021, by the Captain of the 'Olympic Champion' about mechanical damage while the ship was ​​6,8 nautical miles southeast of the Corfu prefecture, operating a scheduled route from the port of Patras to the ports of Igoumenitsa and Ancona with 362 passengers and 149 vehicles on board. After the ship reached the port of Igoumenitsa, the passengers were disembarked . Officers of the Local Ship Inspection Squadron boarded the ship, where a malfunction was found in the clutch at port main engine No 2. The Central Port Authority of Igoumenitsa banned the ferry from sailing until the presentation of a certificate of class maintenance by the attending classification society. The passengers were forwarded to their destinations with another ship, the 'Hellenic Spirit'.

A fire broke out in the early hours of Sep 28, 2019, in the car deck of the 'Olympic Champion', which had 538 passengers, 79 crew members and 293 vehicles on board, off the port of Igoumenitsa. The ferry was en route from Igoumenitsa to Venice. A patrol boat, a tug and a fire boat responded immediately. The fire broke out at deck 4, affecting two trucks. The fire was soon under control as the ship’s automatic fire-fighting systems worked from the very first moment. When the blaze was detected, the ferry changed its route and headed straight back to the port of Igoumenitsa, where all of its passengers and most of its crew evacuated the vessel for safety reasons. Two of the passengers presented respiratory problems due to the smoke inside the vessel and were transferred to the Health Center of Igoumenitsa. The ship's crew was in good health, and the process of unloading vehicles has begun. Two of the passengers were transported by ambulance to the hospital in Igoumenitsa for first aid. A fire brigade has been embarked on board to further address the situation. No pollution was detected. The Central Port Authority of Igoumenitsa carried out a preliminary investigation. The ferry left the port of Igoumenitsa five days after the fire on board on Oct 2 at 5.40 p.m. The ship berthed in Perama/Piraeus on Oct 3 at 9.50 a.m. Greek report with photos and video: https://ellinikiaktoploia.net/pyrkagia-xespase-sto-olympic-champion/ https://greece.greekreporter.com/2019/09/28/538-passengers-evacuated-after-fire-breaks-out-on-igoumenitsa-venice-ferry/