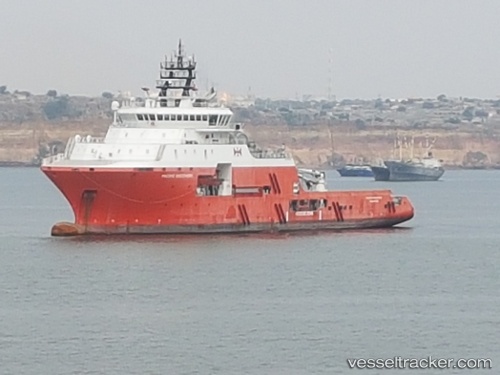 A replacement support ship is heading to the Maari oilfield to continue work on the $60 million upgrade of the Raroa storage and production vessel. Eight mooring lines anchoring the Raroa to the sea floor 100 metres beneath are being overhauled. But earlier this month a support vessel, the Pacific Discovery, got rope caught in one propeller, causing significant damage. A second propeller was also affected in the April 11 accident and the ship had to be towed from the site, about 80kms off the Taranaki coast, to Port Nelson, on the South Island, for repairs. http://www.stuff.co.nz/taranaki-daily-news/news/79381372/maersk-server-to-replace-damaged-pacific-discovery-on-maari-oilfield-upgrade.html

While working in Taranaki waters the "Pacific Discovery" has damaged two of its propellers and was taken under tow to Nelson. Maritime New Zealand was notified on Apr 11, 2016, at 10.30 a.m. after a rope had become tangled around one propeller, seriously damaging it while another propeller also sustained damage. There were no injuries to crew reported. The vessel was due to arrive in port on Apr 12 at 3 p.m.

The 17.864 BHP PACIFIC DISCOVERY is the 6th unit out of a series of 8 D-Class AHTS's built for Swire Pacific Offshore in Singapore. The ABS classed PACIFIC DISCOVERY (IMO 9456202) was built at the PAX Ocean yard in Singapore and the 6605 GRT mighty vessel is having a length of 92 meters and beam of 22 meters. The D-Class vessels, are built to Clean Class Design, SPS 2008 and Ice notations are equipped with powerful, large capacity 500 MT RRM Brattvaag winches. They are powered to support the latest generation semi-submersible rigs operating in harsh deepwater environments and have sufficient cargo capacity and clear deck space for a wide range of other offshore applications. The vessels are equipped with the latest Dynamic Positioning technology, enhanced station keeping (high ERN) with an independent drop down azimuth thruster, Anchor Recovery Frame (ARF) and Deck travelling cranes