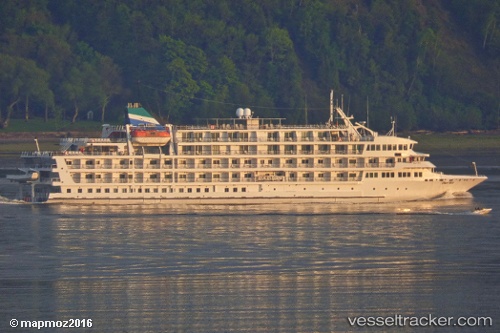 Transport Canada has fined the "Pearl Mist" $6,000 for going too fast in the Gulf of St. Lawrence. The ship allegedly violated the federal government's 10-knot speed limit that was put in place in early August to prevent further deaths of endangered North Atlantic right whales.​ Fisheries Minister Dominic LeBlanc has promised the government will do what it takes to protect North Atlantic right whales, which in addition to being struck by ships this summer have become entangled in fishing gear. The federal government previously fined two other vessels for travelling above the speed limit. An owner of a vessel has 30 days to challenge the findings or the amount of the fine.

Residents in Southwest Harbor are not thrilled about a proposal to stop a cruise ship right outside of the town in September. According to a member of the Harbor Committee, Pearl Sea Cruises is hoping to anchor its Pearl Mist cruise ship there. The vessel is over 300 feet long. At a Harbor Committee meeting Monday, which drew a large public turnout, the committee voted 5-0 to recommend to town selectmen to ban cruise ship activity. Now it will be up to the Board of Selectmen to decide whether to follow that recommendation, according to a member of the Harbor Committee. Many community members believe allowing this ship to stop in would set a precedent for more cruise ships. They ultimately think it will transform this small town on the "quiet side" of Mount Desert Island. Officials say the plan would be to have passengers tender into a private dock in town. Those passengers would then be taken to Bar Harbor and Acadia National Park by bus. http://www.wcsh6.com/news/local/cruise-ship-controversy-in-southwest-harbor/457210435

More cruise-savvy travelers may have the Great Lakes option this summer. Cindy Larsen, president of Muskegon, Michigan, Lakeshore Chamber of Commerce, is planning for a boost in cruise line tourism in her city. The Pearl Mist cruise ship will stop in Muskegon 10 times this summer. “Simultaneously, we saw the cruise industry starting to grow while our downtown was experiencing a lot of development,” she said. “We thought it was the perfect time to start reaching out to cruise lines.” Great Lakes cruise lines have been around since the 1800s. Prior to highway systems and cheap airline travel, they offered luxurious trips close to home. http://greatlakesecho.org/2016/03/31/great-lakes-ports-open-their-locks-for-cruise-lines/