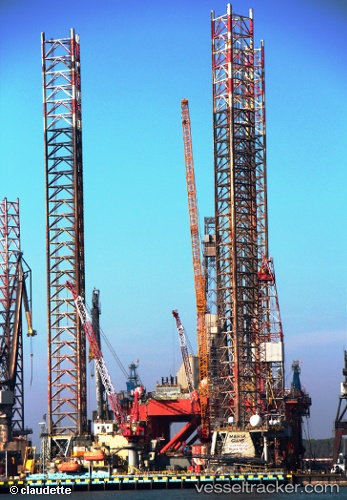 On May 17, 2018, the "Fluvius Tavy", coming from Emden, allided with the drilling rig "Maersk Giant" in the port of Esbjerg. The coasterwas on its way into the port, when the outgoing current probably turned the ship around, and the master lost control. The ship drifted sideways into the rig andcaused minor damage. The "Maersk Giant" was located alongside two other rigs outside the dockyard at rhe Dogger Quay. The "Fluvius Tavy" berthed at the Shetland Quay at 8 a.m. The accident was being investigated by the Danish Navy Operative Command. Danish report with photos: https://www.jv.dk/erhvervesbjerg/Skib-kolliderer-med-Maersk-borerig-i-Esbjerg-Havn/artikel/2611828

Lifeboat incident getting investigated by PSA

On Jan 14, 2015, the PSA launched an investigation of the lifeboat incident on the Mærsk Giant" which occurred during testing of the lifeboat systems on the mobile drilling facility. One of the conventional lowered lifeboats was unintentionally lowered to the sea. The lifeboat then drifted underneath the facility. The wire rope which the lifeboat was lowered on wore through. Following the incident, the lifeboat drifted away from "Maersk Giant" with an emergency vessel as escort. There were no personnel on board the lifeboat when the incident occurred. The PSA took a serious view of the incident, and has decided to undertake an investigation. The object of the investigation was to ascertain the sequence of events, proximate and underlying causes, actual and potential consequences and to identify any regulatory breaches. The intention was to contribute to learning and transfer of experience and thereby to help prevent similar incidents. The investigation will result in a report that will be published on ptil.no. The rig is presently positioned on the Yme field in the southern North Sea. Talisman Energy Norge AS has consent from the PSA to use it as living quarters in connection with preparations for removing the Yme facility.

On Sep 21 at 6 a.m. four tugs were finally able to pull the "Mærsk Giant" out of the port of Hirtshals. The rig will be towed to the Norwegian sector of the Northsea. It was completed ten days ahead of schedule, but severe weather has kept it in port for a week. The rig has stayed in Hirtshals since June 28 for overhauls and upgrading which cost Maersk Drilling 400 million Euro, but has also extended rig's lifespan by 10 years. The "Maersk Giant" has drilling contracts in the North Sea until 2014