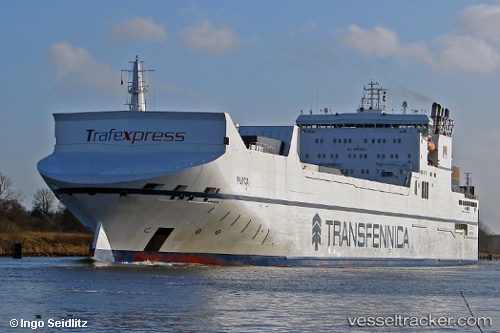 Transfennica will be well prepared to meet the future new environmental regulations. After a successful operating period on MV PLYCA, Transfennica is now applying the innovative scrubbing system to five more vessels in its fleet. Transfennica is fully committed to the environment and started the process of compliance to the future environmental standards in 2012. It installed one of the largest marine exhaust gas scrubbing systems in the market on the MV PLYCA. After a successful operating period of more than 12 months, Transfennica is now ready to apply the Alfa Laval’s scrubber (serving both main engines as well as both auxillary engines) to its motor vessels TIMCA, KRAFTCA, GENCA, TRICA and PULPCA By timely compliance Transfennica ensures the operation of transport in mentioned regions, which is essential and reassuring for all its present and future clients to facilitate their shipping requirements. Source: Press Release

Largest exhaust gas scrubber unit to be installed on Plyca

Shipdock has reached an agreement with Spliethoff, the Amsterdam-based ship-owning company, for the largest exhaust gas scrubber unit installed so far on board a commercial vessel. Due to forthcoming new IMO sulphur legislation, Shipdock is expecting an increased demand for this type of conversion. This is the first scrubber capable of handling several exhaust gas inlets simultaneously (two main engines and two auxiliary engines producing a combined engine power of 28.000 kW). It will be installed on Spliethoff’s vessel m.v. Plyca during her scheduled dry dock visit during October of this year. http://www.seanews.com.tr/article/SHIPBUILDING/83653/europe--Exhaust--gas-Scrubber--install--News-by-topic--Shipdock--The-Netherlands.-/

On Jan 21, 2012, at 11.40 p.m. the "Plyca" while passing the inland port of Brunsbüttel eastbound had so much speed off the TOTAL bunker station that strong suction and swell caused movements of the moored vessel "Tiwala"", Antigua & Barbuda flag, so that one of the ship's bow lines broke. The movement caused considerable damage to the gangway and a shelter with hose reels. The Water Police Station Brunsbüttel launched an investigation. The master of the "Plyca" had to pay a guarantee deposit of 175 Euro.