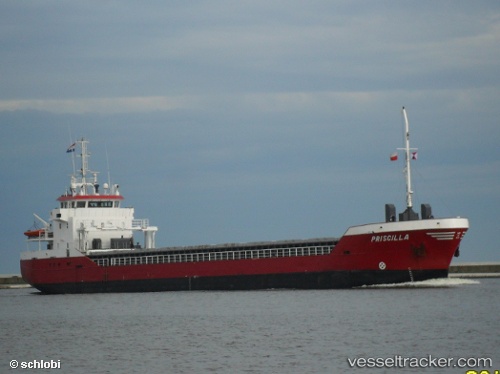 The helsmman of the 'Priscilla' was busy watching music videos on his mobile phone, rather than watching the ship's course when the ship ran aground on July 18, 2018, the Maritime and Coastguard Agency (MAIB) conclueded following an investigation into the grounding which caused serious damage to the hull. The report described how the ship, heading for the Portland Firth, was on a more southerly course than planned. But the officer did not see it because he was more concerned with the music videos on the mobile than on the screen which might have shown him that the ship was on the wrong course. In fact, he did not follow the ship's course for about two hours, but instead blurted out music videos. When he finally realized that the ship was on a completely wrong course, he chose an alternate route, relying solely on data from the radar and not on other navigation data. At the same time, the navigation alarm on the bridge was not switched on, nor was there a lookout post manned despite the night sailing. And although the mate had taken a rest before going on duty, he had been drinking alcohol and suffering from anxiety and restlessness, the report said. About watching videos on the watch, the report said that it could be seen as a way to stay awake at night alone on the bridge. However, the reality was that using cellular phones for diversifying purposes was a significant distraction compared to the critical security task, which was to monitor the ship's position.

The "Priscilla" has been allowed to continue its passage south. Inspections revealed she suffered only minor damage when she got stuck on the Pentland Skerries on 18 July. A dive inspection had revealed some minor damage which did not affect the structural integrity of the vessel. The salvage contract was terminated on July 27, and the ship was passed back to its owners. It will now be allowed to continue its passage to Silloth in Cumbria with its remaining cargo under various strict condition. Part of the ship's 3,300 tonne cargo of fertiliser was offloaded onto barges during the salvage operation to lighten the vessel, while 28 tonnes of oil were also removed ahead of the refloating. Following discharge in Silloth, the owners will submit their future passage plans to take the vessel to a repair yard. On July 28 the ship remained at anchor in Scapa Flow, awaiting suitable weather conditions for the passage. On July 31 it moored on Bangor Anchorage. Reports with photos: https://www.bbc.com/news/uk-scotland-highlands-islands-44987555 https://www.tugspotters.com/app/content/2018/07/priscilla-salvage-vessels-orkney-islands/

The "Priscilla" has been successfully refloated on July 25 at 9 p.m. The vessel was towed, with the assistance of a lifeboat, to Scapa flow, Orkney Isles and undergo further assessment at a safe anchorage, including an underwater dive inspection. It dropped anchor in pos. 58° 52.48' N 002° 57.88' W with the "Multratug 20" remaining on standby. Over 270 tonnes of cargo had been successfully discharged from the vessel onto a reception barge. The barge proceeded to Windwick Bay where the cargo was loaded onto the sister ship "Alana Evita". A second barge joined until approximately 1,350 tonnes were removed. To control an unplanned refloat during lightering operations a tug will be connected to the stern of the "Priscilla" once 500 tonnes had been discharged. Additional vessels on scene and supporting the salvage operation included the "Multratug 20", the "Multrasalvor 3" and "Multrasalvor 4". Wagenborg has provided the "Wagenborg Barge 14" and the "Alana Evita". In addition Briggs has provided the "Forth Guardsman", "Forth Trojan" and "Sprucelight". Report and photos: https://www.energyvoice.com/other-news/177817/cargo-ship-arrives-at-scapa-flow-following-salvage-operation/ https://pbs.twimg.com/media/Di4WhHLX0AAo29-.jpg