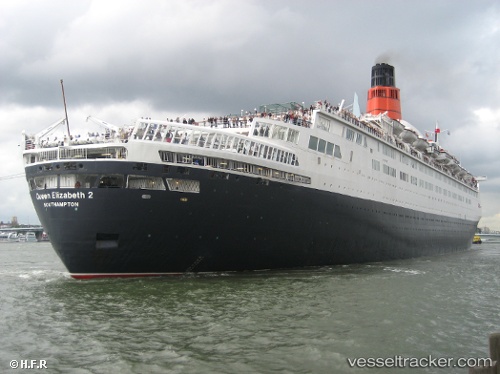 (Reuters 2018-04-18) – The Queen Elizabeth 2 (QE2) ocean liner has been given a new lease of life as a floating hotel in Dubai, 10 years after the Gulf Arab emirate bought it for $100 million. State-owned Dubai World bought the QE2 from Cunard Line in 2007, but the 2008 financial crisis delayed any plans for the 40-year-old vessel, one of the world’s most famous ships. Now the QE2, permanently moored at Mina Rashid port, has been refurbished based on the original design, from its carpets to the theater and even restaurant menus featuring dishes served in the liner’s heyday. A reception housed in a boat-shaped structure at the quay welcomed guests to Wednesday’s official opening. Large portraits of United Arab Emirates rulers hang opposite portraits of a young Queen Elizabeth II and Samuel Cunard, founder of the company that built the ship. “There is a huge following around the world for the QE2 because of how famous she is and what she stands for,” said Hamza Mustafa, chief executive of PCFC Hotels, the Dubai World subsidiary that owns the ship. The QE2 first entered service in 1969 and has sailed around the world 25 times, carrying more than 2.5 million passengers, the company said.

Iconic ocean liner QE2 has made her final voyage back to Port Rashid after undergoing ship to hotel conversion work at Dubai Drydocks World. A new Instagram page titled “qe2dubai” posted a photograph on Thursday of people holding a "welcome home QE2" sign at the port with the famous ship in the background. The post said the Cunard Line's former flagship had undergone "deep cleaning and paint retouch" and was now ready for the final phase of her restoration. Earlier on Thursday, Instagram posts from workers at the drydock facility showed the ship being pulled back to her home at the old cruise terminal by tugs as she can no longer sail under her own power. According to the QE2 Story website, the vessel has been repainted while in drydock, anchor chains taken off and her propellers removed. New livery - Queen Elizabeth 2 – written in Arabic and English has also been affixed to the ship. On the stern, Dubai's distinctive tourism logo can be seen along with Port Rashid underneath Queen Elizabeth 2. https://www.thenational.ae/uae/welcome-home-qe2-famous-liner-makes-final-voyage-to-port-rashid-before-opening-as-hotel-1.717178