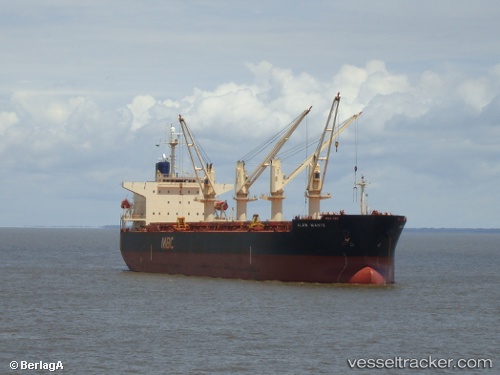 After several failed attempts during the recent 10 days the POSH subsidiary Semco Salvage & Towage has successfully refloated the "Alam Manis" which had hit the Saya De Malha Bank in the Indian Ocean, on Feb 15. The ship was to head to Pipavav for inspections. Total salvage costs were around 800.000 $.

The "Alam Manis" ran aground on Feb 2, 2017, in position 09 43S 061 18E on the Cargados Carajos Shoals, NNE of Mauritius. The bulkcarrier was en route from Richards Bay to Pipava. A salvage company was already contracted, probably with Five Oceans. The vessel has already run aground on July 17, 2015, off Luzon island in rough weather, salvage operations by the Singapore-based Semco Salvage & Towage had commenced four weeks later (photo of that grounding: http://www.crewtoo.com/maritime-news/seafarers-rescued-from-grounding/attachment/alam-manis/)

Salvage operations have begun to refloat the "Alam Manis" that ran aground off the coast of Candon Ilocos Suron July 17. The Singapore-based Semco Salvage & Towage has been contracted to help free the vessel which was carrying 53,795 metric tonnes of bulk nickel ore when it began listing to starboard during bad weather, around 225 nautical miles off Taiwan, while en route from Loreto Dinagat to Lianyungang. Henry Libo-on, the ship’s first mate, reportedly died of a heart attack shortly after the vessel ran aground. The rest of the vessel’s 20 Filippino crew and captain were rescued. The salvage tug "Salviscount" has also been employed in the operation from POSH Terasea Offshore, and will escort the bulker towards the nearest port of refuge, San Fernando in north Luzon.