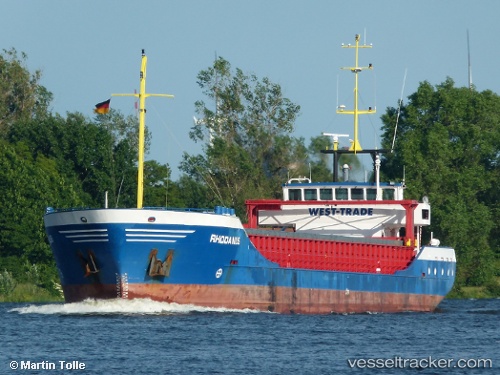 The 'Rhodanus', en route from Rotterdam, to Gijon, suffered a main engine overheating and issues with the pump, in position 50 25 33.6 N, 000 36 39 W, on Jan 16, 2020 at 07.30 a.m. The crew requested two hours to effect repairs and test the engine. Subsequently, pump parts were installed, and engine trials were successful. The 'Rhodanus' resumed its voyage in the foremidday hours with an ETA as of Jan 19.

Freighter under tow to Fos-sur-Mer

The 'Rhodanus' was refloated at Cala Longa on Oct 18 at noon after the salvage plan was approved by the Mediterranean Maritime Prefect in the night of Oct 17. After draining of the fuel and dropping of the anchor, the ship was salavged by the 'Jason' jointly with the towed port tug 'Persevero' from Sant'Amanza. The ship was moored in pos. 41° 25.39' N 009° 14.36' E where the RINA classification company started conducting a post-shipment inspection of the ship, relying in particular on the National Navy's diving aid. The transit of the ship to a French port was now subject of the recommendations that will be made by RINA. This transit will also be the subject of a plan proposed by SMIT Salvage and validated by the Mediterranean Maritime Prefect. French reports with photos: https://www.premar-mediterranee.gouv.fr/communiques-presse/desechouement-du-cargo-rhodanus-suite https://www.premar-mediterranee.gouv.fr/communiques-presse/desechouement-du-cargo-rhodanus