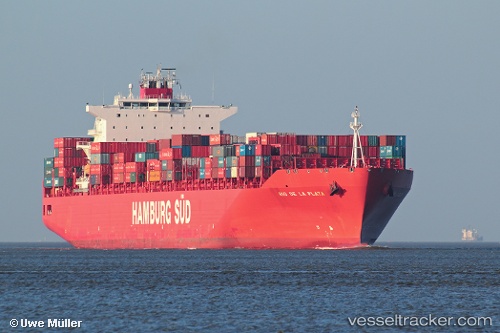 Investigators have called for a review of safety systems

Investigators have called for a review of safety systems on Singapore-flagged ships after a crew member of the 'Rio De La Plata' was seriously injured when the container ship was preparing to leave the Port of Timaru in Nov 2020, and three crew members had started unmooring at the front when one of them got caught in a rope. The rope handler was dragged into the mooring winch, causing serious injuries to their hand and face. An investigation by the Transport Accident Investigation Commission found the ship's safety system wasn't followed, equipment should have been installed better and planning was insufficient. The ship's safety plan identified mooring operations as a risk. A standard mitigation was to have a forward mooring party of four crew operating two winches. The investigation found the mooring party was a crew member down. The supervisor was also operating the winch, and each rope handler had to both handle the rope with one hand and signal to the supervisor/ winch operator with the other. With some safety-focused thinking, they could have changed the unmooring plan to use just one winch at a time, enabling one worker to concentrate on handling the rope and another to monitor the rope handler and communicate safely with the winch operator. It found it was likely the crew member stepped too close to the mooring winch while completely engaged in communication with the winch operator and handling the rope, reducing their awareness of their own safety. "Unmooring operations are just as dangerous as mooring operations and crew must ensure that there are always sufficient personnel available to carry out the operation safely," the commission said. "Equipment on board ships must be installed and operated as intended by the manufacturer. Any deviation from the manufacturer's recommendation can increase the risk of serious injury." Last month, the commission recommended the Maritime and Port Authority of Singapore investigate and potentially review its audit processes to see if they could be further developed to identify weaknesses in the safety management system and whether further practical improvements could be made. The Maritime and Port Authority of Singapore responded last week, saying it had launched a preliminary inquiry. "We have reviewed the company's investigation report and are satisfied with its corrective / preventive actions to prevent a recurrence," the authority said. It said this case would be published in a regular e-bulletin to the maritime industry to highlight the hazards associated with mooring operations. It had also shared the case with its flag state control department to strengthen checks of mooring operations as part of the control and monitoring programme for Singapore-flagged ships.

67 members of the Rail and Maritime Transport Union were among the 94 port workers who were tested on Aug 9, 2021, and told to isolate, after crew members on the 'Rio de la Plata' tested positive for Covid-19. The vessel spent more than two days berthed at the Port of Tauranga wher e it had arrived on Aug 4. In the night of Aug 7 the workers started getting contacted and told they had to report to work at 9am to be tested after 11 of the 21 crew on board the 'Rio de la Plata' had tested positive for Covid-19, with some likely to be active cases.. Further test results were expected on Aug 9 and would help determine how many of the crew were likely to be historical cases and no longer infectious. 91 Tauranga port workers had been tested by 11.30 a.m. with the first results expected later in the day. The Port of Tauranga was first alerted on Aug 3 that the container ship had been boarded in July by an Australian pilot in Queensland who later tested positive for Covid-19.The pilot developed symptoms and tested positive nine days after being aboard the vessel. The pilot was confirmed to have the Delta variant. Maritime NZ later cleared the 'Rio de la Plata' for pilot boarding. The ship was also cleared to berth in Tauranga by the Medical Officer of Health at the local public health unit. In the night of Aug 3, a local pilot and the stevedores busy unloading the ship were unexpectedly told to stop working and to go home and isolate. The following morning, local health authorities gave the all clear for work to resume on the vessel, with no need for workers to isolate. The initial action was taken from an abundance of caution. But then public health staff took test swabs in Tauranga from the crew of the 'Rio de la Plata' as part of the requirements for entry for the vessel to its next port of call, which was Napier. 11 of the 21 crew members tested positive, with one test result currently indeterminate. The ship was anchored in pos. 37° 37.69' SE 176° 20.50' E on Aug 9.

Maritime New Zealand was investigating an incident in which a crew member of the 'Rio de la Plata' suffered serious injuries at P Timaru on Nov 14, 2020, during the unmooring operations while the ship was departing the port en route to Lyttelton”. The man was taken to hospital for treatment. Maritime NZ started interviewing the people involved, conducting a scene examination and checking documents as part of the investigation process. The Transport Accident Investigation Commission was also investigating.