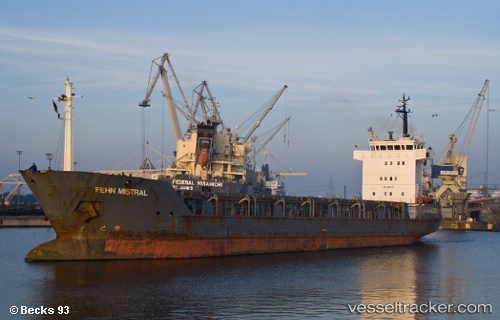 On Nov 10, 2018, at 4.32 a.m. the "Rix Crystal" ran aground at Sprogø. The anti pollution vessel "Mette Miljø" was deployed by the Danish Defense Operations Center. The accident happened when the ship, coming from Aarhus, was unloading rocks for the coastal protection work currently being carried out in a small bay between the highway ramp on Sprogø and the dam of the railway station tunnel. The ship apparently came too far into the bay with too shallow water. There was a fresh SE wind blowing around Sprogø at that time. There was no evidence of oil pollution, and the "Rix Crystal" refloated and shifted a safer position next to Sprogø. It must now be investigated by divers before it is allowed to continue the work. On Nov 12 it was moored in position 55° 0.53' N 011° 49.84' E off Vordingborg. The "Rix Crystal" berthed at the East Metal Nakskov A/S Skibsværft on Nov 12 at 8 p.m. She sailed again on Nov 15 at 11.40 a.m. and headed to Lisahally, ETA Nov 19.

The "Rix Crystal" returned to Copenhagen coming from Vordingborg on Sep 21 and berthed at the Sten & Grus Prøvestenen A/S at 9.30 a.m.

In the afternoon of Sep 18, 2015, the "Rix Crystal", coming from Vordingborg with a cargo of stone and gravel bound to Vejle, allided with the Masned Sound Bridge. The construction was immediately closed to all traffic. The Storstrøms Bdrige and Masned Sound were blocked for both train and car traffic. DSB has deployed busses between Vordingborg and Nykøbing. Preliminary investigations did not indicate that the bridge suffered structural damage and was temporarily opened again. However, the protective dolphins were crushed by the impact. The accident happened during a turning manoever, when the ship, which was about to berth, was caught by currents and pushed broadside against the pilings of the bridge. The Danish tug "Fenja" (IMO: 9192076), was after attempts to pull the ship from the Bridge with a smaller tug had failed. A more successful attempt to remove the ship was undertaken on Sep 19 at 1 p.m. The ship dropped anchor nearby for investigations with the tug remaining on standby. Danish reports with photos and video: http://nyhederne.tv2.dk/1234/2015-09-18-vending-gik-galt-storstroemsbro-blev-lukket-efter-paasejling http://sn.dk/Vordingborg/Masnedsundbroen-paasejlet-af-coaster/artikel/517328 http://ekstrabladet.dk/112/togdrift-ramt-coaster-paasejler-bro/5739308 http://folketidende.dk/Lokal-nyt/Blev-taget-af-stroemmen/artikel/318163