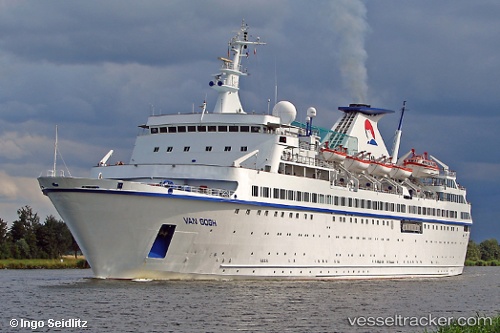 The rescued migrants on the "Salamis Filoxenia" on Sep 25 have agreed to disembark following a tense stand off with authorities. The situation was resolved shortly before dawn on Friday after police entered the vessel to talk to the remaining refugees, who finally agreed to leave. The registration of the refugees was ongoing, all have stepped down from the vessel on Sep 26. Around 300 rescued migrants - mainly women and children - had refused to leave the cruise liner. They had wanted to be disembarked in Italy and not at the port in Limassol. Most appeared to be Palestinians while others were from Syria. They finally realised that it was not possible to continue to other countries without first staying here and the procedures continuing. The loss for the cruise ship company was estimated to be several hundred thousand” euros through delays and cancellations. Rport with photo: http://www.nationalturk.com/en/after-rescue-by-cruise-ship-cypriot-police-forces-syrian-refugees-disembark-breaking-news-54438

The 345 rescued Syrian migrants rescued by the "Salamis Filoxenia" refused to disembark in Limassol. The were taken aboard on Sep 25, after the small vessel they were on got into trouble in stormy seas near southern Cyprus. They were to be transferred to a reception center near Nicosia, where they would be given shelter and medical treatment until authorities determined how to deal with them. They refused, and demanded to be delivered to Italy. The cruise company was suffering huge losses, as the vessel was scheduled to sail on Sep 25 to Israel with some 300 tourists, mainly Russians. They had their journey cancelled and were accomodated in Limassol hotels. The 700 paying passengers disembarked from the liner, but only 65 of those rescued at sea left the ship. On Sep 26 at 4:00 am (0100 GMT) , negotiations were continuing, with doctors, nurses, civil defence and Red Cross workers on hand. Report with photos: http://news.yahoo.com/cyprus-launches-rescue-mission-300-refugees-off-coast-101833941.html

345 people, thought to be Syrian refugees, have been rescued by the "Salamis Filoxenia" off Cyprus after their boat ran into trouble in rough seas on Sep 25, 2014. They were taken aboard the ship and were said to be in good health. 52 children were on the small fishing boat that had sent a distress signal. They were spotted 55 nautical miles south of the town of Paphos. It was quite a difficult Operation in rough seas. The vessel was expected to dock in Limassol later the day. Cypriot authorities had picked up a radio distress signal as the boat was caught in stormy seas. Reports with photos: http://www.bbc.com/news/world-europe-29358265 http://www.mod.gov.cy/mod/mod.nsf/All/246CB77A89EFD41AC2257D5F00219CF5?OpenDocument http://www.dailymail.co.uk/news/article-2770525/Thanks-rescuing-certain-death-Italy-Hundreds-Syrian-refugees-saved-Cyprus-stage-sit-cruise-liner-demanding-taken-mainland-Europe.html