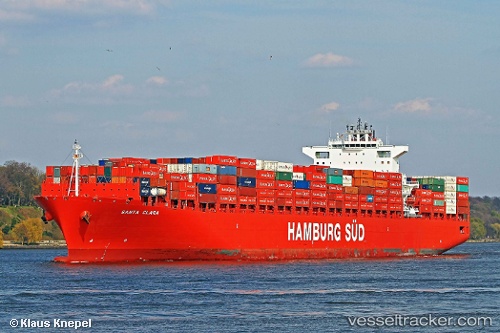 The 'Santa Clara', while enroute from Rotterdam to Algeciras with 23 crew members on board, suffered a main engine breakdown in position 50 25 12.0N, 000 35 21.0W, 23,67 miles from Selsey Bill on June 17, 20201. at 9.40 p.m. while sailing within the South-West shipping flow. The crew was communicating with the Solent Coastguard every 30 minutes. After the crew successfully completed repair works it resumed its voyage with an ETA as of June 20.

On Feb 8 the water police stopped the search for the 24 year old woman who was missing from the 'Santa Clara' off Bremerhaven. There was no cchance for a sruvival due to the low temperatures. The police assumed an accident. She fell over board while working at the gangway. The container ship left Bremerhaven on Feb8 at 9.40 a.m., headed to Rotterdam.

Crew member lost over board

On Feb 7, 2021, the MRCC of the DGzRS was alerted after a female crew memberof the 'Santa Clara' was loat over board the 'Santa Clara' in the Weser estuary, while the ship was enroute from Coryton to Bremerhaven at 3.44 a.m. near buoy 39 off Fedderwardersiel. The lifeboats ‘Hermann Rudolf Meyer‘ of the Station Bremerhaven and the ‘Emil Zimmermann‘ of the volunteer station Fedderwardersiel, two pilot boats and the police boat ‘Wisura‘ and other ships headed to the position. First on scene was a helicopter of Northern Helicopter, followed by a Sea-King-helicopter of the German Navy. The extreme low water hampered the search on the water. The ‘Santa Clara‘ berthed at the NTB NordseeTerminal in Bremerhaven at 5 a.m. In the late foremidday the search was broken off due to the lack of noew information. At the time of the accident winds with gusts of 10 Beaufort were raging in the area. The air temperaturee was -8 degrees C, the water tempperature two degrees. The police Bremerhaven launched an investigation.