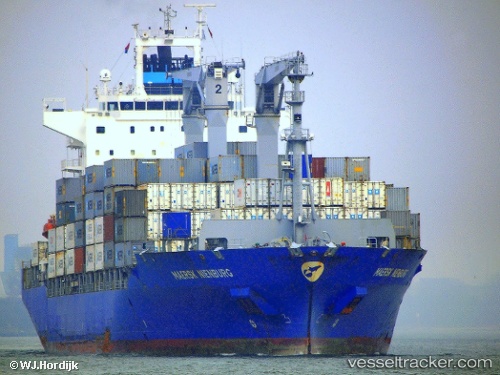 90 miles northwest of Brest, a 70-year-old English single-hand-sailor got in difficulties in the night of Jan 23, 2020, aboard his 8,5-meter sailboat when being injured when his ship was dismasted. The man has no more means of radio communication. Luckily, the bridge watch of the 'Maersk Nienburg', coming from Bremerhaven, remarked his distress light signals west of the Ouessant Traffic Separation System At 9 p.m. the CROSS Corsen which had already organized the rescue of two sailors whose sailboat sank off the Pointe du Raz in the afternoon, was alerted and coordinates the rescue operation. Despite wind force the container ship managed to recover the British sailor at 10.20 p.m. The ship was then asked to approach the French coast. At the same time, the SNSM station Conquet was alerted and deployed the lifeboat 'SNS 151 - La Louve' to rendezvous with the freighter 10 miles off the coast. On Jan 24 at 6 a.m. he was transferred aboard the lifeboat 'La Louve' which took him back to shore at Le Conquet, where the injured was taken care of and transported to the Cavale Blanche hospital in Brest. The 'Maersk Nienburg meanwhile had resumed its voyage, heading south-west. The damaged sailboat remained adrift in the sea, and an urgent notice to mariners (AVURNAV) was issued to reinforce the watch. The last known position of the boat was 48.52 N 06.46 W with navigational lights on. French report with photos: https://voilesetvoiliers.ouest-france.fr/securite-en-mer/naufrage/blesse-a-90-milles-de-brest-un-marin-solitaire-de-70-ans-sauve-de-nuit-par-un-porte-conteneurs-9baf2740-3eaa-11ea-9684-70194a6e810b

The "Maersk Nienburg" was approached by two perpetrators in a small skiff who came alongside the vessel in position 02 22 18S, 80 00 54W, on Aug 20, 2018, at 3.50 p.m. The embarked security guards spotted the perpetrators, raised alarm and switched on all deck lighting. Seeing the crew's alertness, the perpetrators aborted the attempt to board the vessel and moved away in their skiff. The incident was reported to Guayaquil Port Control.