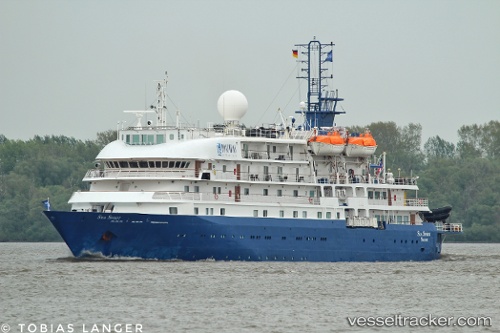 Rolls-Royce has retrofitted new Zero Speed Stabilisers onboard Poseidon Expedition’s Sea Spirit to improve operational performance, while minimising fuel consumption, onboard vibrations and noise. Housed in a customised fin box, the new retractable fin stabilisers were installed during Sea Spirit’s dry dock in Portugal earlier this spring to enable the ship to safely navigate the icy Greenland and Barents seas.

25 FEBRUARY 2014 Poseidon Expeditions announced today that it will begin operating the 114- passenger expedition vessel Sea Spirit in May 2015. Founded in 1999, the company was a pioneer in icebreaker cruises to the North Pole, and has more recently broadened its offerings to include Antarctica aboard the Sea Spirit's sister ship, the 114-passenger Sea Explorer. With the acquisition of the Sea Spirit, Poseidon will offer a full range of polar cruises, beginning with a May 2015 14-day voyage from the Netherlands to Scotland, the Faroe Islands and Iceland

A woman in the 60s died after falling into the sea from a rubber boat in the Fjortende Gulf in Spitsbergen on June 17, 2013, in the morning. The accident happened during disembarkation from the "Sea Spirit" which was on a cruise in the Arctic and Antarctic for the U.S. company Quark Expeditions. The boat was hit by a large wave, and all 13 aboard fell into the sea. The deputy governor Svalbard sent a Super Puma rescue helicopter with a doctor on board. When the helicopter reached the cruise ship, the woman was dead. Three others in the boat that was also being used for ship-to-shore shuttles and excursions suffered minor injuries. Two of them were flown in the rescue helicopter to the hospital at Longyearbyen for treatment. The woman's body was being sent for autopsy. The accident was under investigation. The witnesses told them the boat was hit by a large wave and tossed around. All its passengers were hurled into the water and later swept ashore. The woman whih had lost consciousness was treated by the cruise ship's doctor, but her life could not be saved.