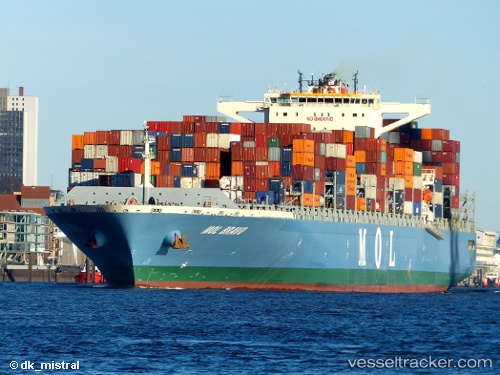 On May 2, 2019, at 6 a.m. a man died aboard the "MOL Bravo" at the Contecon Manzanillo Container Terminal in Manzanillo during cargo operations. A container fell under circumstances that have not yet been clarified onto the man who died instantly. The ship had come from Callao and was nnxt bound to Tokyo. The Attorney General's Office was notified and sent ministerial staff to verify what happened. at 8 a.m. the Forensic Medical Service boarded the ship to proceed with the removal of the corpse.

JAXPORT welcomes largest containership to ever call a Florida port

​JAXPORT and the TraPac Container Terminal at Dames Point on June 24 welcomed the 10,100-TEU (container) MOL Bravo, the largest containership to ever visit a Florida port. The MOL Bravo transited the Suez Canal from Asia before reaching the U.S. East Coast, the company said in its press release. Although the ship is moving a significant amount of cargo during its Jacksonville stop, it won’t be able to operate at full capacity due to the 40-foot depth of the St. Johns River shipping channel. The federal project to deepen the channel to 47 feet to accommodate more cargo aboard the largest ships is set to begin construction by early 2018.

Seaspan Corporation (NYSE:SSW) announced on July 16 that it accepted delivery of a 10000 TEU containership, the MOL Bravo. The new containership, which was constructed at Jiangsu Yangzi Xinfu Shipbuilding Co., Ltd. using Seaspan's fuel-efficient SAVER design, is Seaspan's fourth of five 10000 TEU SAVER design containerships scheduled for delivery in 2014. The MOL Bravo will commence an eight-year, fixed-rate time charter with Mitsui O.S.K. Lines Ltd. ("MOL"). The ship is the first of a total of five 10000 TEU SAVER design vessels, and the seventh of a total of eleven vessels, to be chartered by Seaspan to MOL. The delivery of the MOL Bravo expands the Company's operating fleet to 75 vessels.