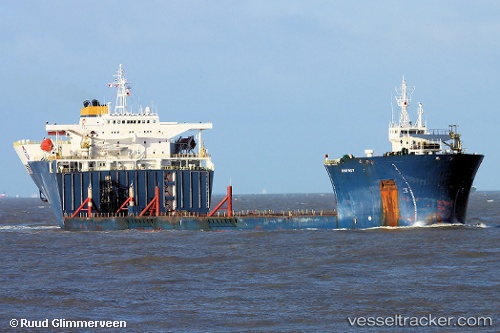 The first of 103 giant steel foundations for the Moray East wind farm off Scotland have been delivered to the Port of Nigg aboard the 'Osprey' for final staging before being transported out for installation at the 950MW project site in the North Sea. The three-legged jackets will be topped with 9.5MW MHI Vestas V164 turbines, bar a trio that will support substations at the wind farm, being developed by a project consortium made up of Diamond Green, EDPR, Engie and China Three Gorges, along with DEME Offshore as lead contractor. The jackets, delivered by OHT’s heavy transportation vessel Osprey, are among the 48 being fabricated at Lamprell’s site in Hamriyah, UAE, and shipped via the Cape of Good Hope on a 12,000 nautical mile journey to the Cromarty Firth, a 39-day transit. Global Energy Group has invested over £50m into the facilities at the Port of Nigg, a former offshore oil & gas construction yard with deepwater berths, to position it as a staging port for the UK offshore wind build, targeted to reach 40GW by 2030. Moray East is slated to be online in 2022 – at price of £57.50/MWhr, two-thirds lower than offshore wind farms in operation off the UK today – generating enough electricity to supply almost 1 million UK homes, while saving 1.4 million tonnes of CO2 emssions annually. Near-term progress on the wind farm has been thrown into question after the vessel meant to install the jackets, DEME’s 'Orion 1' had its main crane collapse while be outfitted for the project in Rostock. Report with photo: https://www.rechargenews.com/wind/jackets-required-steel-tripods-arrive-for-scotlands-moray-east-offshore-wind-project/2-1-803242

Last weekend April 25, OHT’s semi submersible heavy load ship OSPREY loaded the newbuilding Jack-Up Rig KUKULKAN in Singapore for transportation to Mexico The OSPREY submerged to the required draft and the rig was delivered alongside by 4 Keppel-Smit harbour tugs.