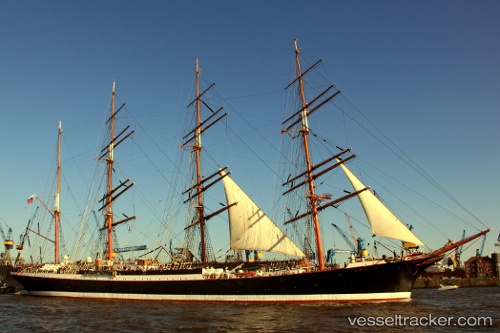 The world’s biggest sailing ship Sedov, which changed its home port from Murmansk in northwest Russia to Russia’s westernmost port city of Kaliningrad in late May, has sailed off from Svetly port in the Kaliningrad Region on a training voyage in the Baltic Sea. "The voyage was due to begin on Saturday evening but the fog prevented the ship’s departure. That is why, the voyage began this morning," spokeswoman for the Baltic State Academy of the Fishing Fleet (part of the Kaliningrad State Technical University, which is the ship’s current manager) Irina Obrazova told TASS. There are 114 cadets from maritime educational institutions of Murmansk, Kerch and Kaliningrad aboard the barque Sedov. The sailing ship is heading for the port of Den Helder (the Netherlands). The sailing ship Sedov will follow the route of the barque Kruzenshtern, which embarked on a training voyage on June 14, the spokeswoman said. Both barques are expected to take part in The Tall Ships Race 2017 (STI), which will pass through Halmstad (Sweden), the Finnish ports of Kotka and Turku, Lithuania’s Klaipeda and Polish Szczecin. In August, the Russian sailing ships will also call at the German port of Rostock. The voyages are expected to be completed on August 18 in Kaliningrad. More: http://tass.com/defense/952017

In the afternoon of June 20, 2013, the "Sedov" was in collision with the German "Lisa von Lubeck" on Texel roads. The "Sedov" was undertaking manoevers and was unable to escape the "Lisa von Lübeck" which was at anchor. was the impression of an informed audience that saw the accident happen. The "Sedov" gave two warning signals before, which is not common when a ship is at anchor. The wooden replica of a fifteenth-century cog was hit and heavily damaged at the foreship. By chance untis of the KNRM were nearby which soon came to their aid. Whether there were injuries, is not yet known. There was an ambulance sent to the port of Oudeschild. Dutch report with photos: http://www2.texelsecourant.nl/lees/15254/aanvaring-bij-rede-van-texel